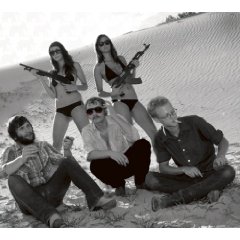 John McCauley was another 18 year-old bedroom cassette expressionist in Providence, RI in 2004 when he discovered Hank Williams, Sr. A greatest hits compilation of that intuitively great songwriter's work inspired him to focus his talents on communicating his lyrics and music as intelligently crafted as he could, with a razor-sharp feel for listener commonality (having to drink to forget, getting out of this city of sin, shivering all night long while tjinking about you, and the things that will always be like that) as much as creating great rustic vocal melodies to get them across.

Touring, picking up the backing players he needed (Dennis and Chris Ryan on drums and bass respectively), putting out his inspired new material on CD-R, and following the yellow-teeth brick-of-skunk-weed road to balmy Brooklyn (which is for modern basement folk singers what Paris was for poets and artists about a century ago I guess) led to originally releasing this album in late 2007. Now Partisan is putting legs on it, for the enjoyment of acoustic anomie and alcohol anthems everywhere, as it begins with several of the best songs of its type I have heard in months.

"Standing At The Threshold" has a two-chord bite that digs in before McCauley delivers the dark tale of filial disconnection and emotional draining ("to fall apart from the inside out and die") between a father and daughter and probably more than that. "Ashamed" is a whorl of pick-up-and-get-away-from-the-good-girl blues, the age-old tale of having to cut yourself out of someone better's life before you both get much worse. "Art Isn't Real (City Of Sin)" seems to be about hating to fake it to make it, using distraction to live with inauthenticity. The music on all these and the other songs avoids any trendy dissonance and allows traditional rules of folk, blues, bluegrass and rock to be sufficient in their expression.

That expression is rarely subverted on War Elephant which is not a problem at all with fourteen songs this strong and worth listening to over and over, which I'm doing right now and should be for some time to come.