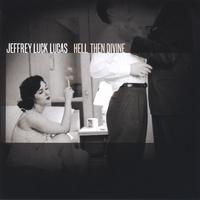 Just when I became convinced that Seattle still had the market cornered on gloomy, overcast music, Bay Area's Jeffrey Luck Lucas comes along with Hell Then DivineReckless Burning showing us that there is a low cloud hanging over San Francisco as well. And the result is one of the most gorgeous and lush country-noir records to debut since Jesse Sykes' .

Jeffrey's aesthetic on Hell Then Divine is straight out of 1940's film noir, both in lyrics and artwork; chock full of gambling, drinking and cheating references – generally sinking to the bottom and damning your own soul to hell type stories. While this may sound kitsch, Jeffrey breathes this record out with a smoothness and maturity that reminds us of the weightiness of Tom Waits or Leonard Cohen, but with the real country roots of Johnny Cash or Waylon Jennings.

The record is consistent and thoughtful, each song pulling you gracefully into the next, and there isn't a single disappointment. The stand-outs are "Cascade" and "The Devil on Me." The latter is a sultry affair with a damp intonation built around a simple and striking guitar melody and chorus line "I've got the devil on me," which feels like a night of cold-sweats and vertigo after a bout of heavy drinking.

To appreciate the full scope of Hell Then Divine, one must look at its author. A former member of 80's garage band, The Morlocks (Epitaph). This prolifically multi-instrumental (and classically trained) artist has appeared over the past several years on records by such polar opposites as Neurosis and Chuck Prophet. All the while, Jeffrey was running through a string of bad luck in his personal life. As in all of the great tragedies, these factors ultimately led to seeking solace and building his private reserve of sinfully poignant songs. Eventually taking these gems into the studio with longtime friend and noteworthy producer, Desmond Shea (Tarnation, Court & Spark, etc.), Jeffrey has again emerged, and has since been seen cavorting around San Francisco with the likes of Jolie Holland.

Looks like Mr. Lucas' luck is once again in upswing. In speaking with his management, Annie at SOUTH, she remarked "there's plenty more where this came from. Jeffrey's got at least four more records in him." You'd do well to keep your eye on this guy.