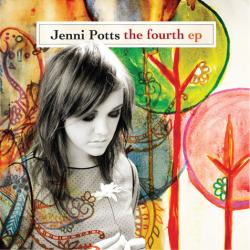 “What came first, the music or the misery?” asks John Cusack’s character Rob at the beginning of High Fidelity. For Jenni Potts, a twenty-year old singer-songwriter from Bellingham, the answer is clearly the latter. She has taken the misery plus angst, depression, denial, and uncertainty, and rolled it into one very compelling record.

The Fourth is Potts’ debut record and it strikes all the right chords. It's introspective and personal but never whiny and always accessible. It's also a thing of beauty. Potts has a soft, delicate and gorgeous voice that suits her songs very well.

The album opens with the title track which, according to her bio, refers to the date of her first suicide attempt and the due date to the child she miscarried. It's a remarkable song both for its lyrical content and execution. In a voice that sounds like she could be Chan Marshall’s estranged younger sister, Potts delivers the most chilling line I’ve heard in a song in many years with a harmony that sounds like she is on the verge of crying (“Do you even mind that I lost our baby?”). Yet throughout the song she tries to remain optimistic. The song (like pretty much the rest of the record) is very stripped-down and focuses almost exclusively on Potts’ voice and her acoustic guitar.

“Friends” is another song similar to “The Fourth”; it's raw, minimalist and revelatory. She sings about a friendship going south when sex gets in the way (“You were the one I made myself think I could trust; I don’t know how it happened but somehow it turned into lust”). She assigns herself much of the blame and wonders how the snap decisions she’s made could have played out if she followed the different path. The final line of that song (“What happened to you, you used to love me? What happened to me, I used to love me?”) is personal yet, like lots of great pop music, for a lot of people wholly universal.

Similar to a then-23 year old Liz Phair on her epic first album Exile in Guyville, Potts uses her music to deal with anxieties and reveal an important elements of her personae that are not always easy to tell someone about. The songs show a complex individual channeling her anxieties through her songs. The Fourth can be an emotionally-challenging record to listen to. It's also the work of an extremely promising young artist trying to figure out her life through song. While listening to this record I kept thinking of the line from Eternal Sunshine of the Spotless Mind where Kate Winslett shouts to Jim Carrey, “I’m just a fucked-up girl looking for her own piece of mind. I'm not perfect.”

I think Jenni Potts (who has a full-length due shortly) is getting closer and closer to finding hers.