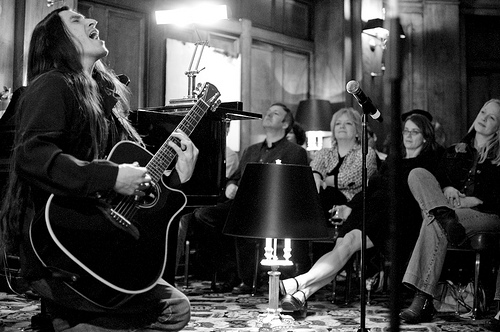 Every December, it’s pretty much a given that “Awesome” member John Osebold has been up to something good. Typically that good comes in the form of a well-crafted free album that results from his annual December project under the moniker Jose Bold, a side project of his with bandmate Kirk Anderson — and this year is no different. This Thursday and Friday, he’ll be taking his winter fixings over to ACT for the presentation of MOUNTAIN.

Honestly, you could tell me that these guys were going to do a Yoko Ono tribute night and I’d still be the first person in line for tickets. They’re that kind of good. John and Kirk — and every single member of “Awesome,” whether they are on the solo or presenting as the sum of their respective parts — give every performance everything they’ve got. It’s undeniable creative magic layered with indie nerdpop genius and mindbending concepts that blow the room away, show after show after show. (And we’re not just saying that because Jose Bold will be opening up at our Imaginary Holiday Office Party, either.) They’re better than bad, they’re worth every buck, and in this particular instance — well, here’s what the official word is on the performance:

Jose Bold’s MOUNTAIN begins with a film. The film begins with a mountain. The mountain emits a sound. The sound is joined by live voices. The voices turn into song. From there, the interaction between two-dimensional film and three-dimensional performers and objects creates a dreamlike experience. 1920s mountain climbing is fused with echoes of a contemporary musical chant, tunnels and railroads built into mountainsides are set to driving drums and guitars, “mountain-grown” Folgers coffee made by desperate 1960s housewives is consumed on stage in 2010, a snow spirit appears before your very eyes, and a special appearance by ’40s and ’50s baritone icon Vaughn Monroe attracts magic bears.

I’m not even quite sure what all of that means, but you can bet your bottom dollar I’ll be at the show. And guess what? You can join us. Mosey on over to ACT’s website for ticketing info here. Pick one up for you and a friend, and make sure to hit the venue early so you can grab yourself a good seat. We’ll see you at the show!