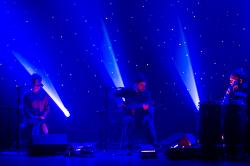 As the house lights dimmed and smoke began to fill the stage, you couldn't help but wonder what José González had up his sleeves. As he sat alone on stage, light pierced darkness like a morning sun peaking over the horizon.

González, in shadow puppet form, swiftly entranced the venue's packed booths as he slowly plucked strings and began "Deadweight on Velveteen." From here he ventured into a far-from-dull instrumental piece which shapeshifted into his larger-than-life cover of the Knife's "Heartbeats."

Later on, two musicians (presumably the friends portion of "José González & Friends") came on stage to accompany him, wielding cowbells and bongo drums. Though very much an active element, the recently added duo kept the attention on González, complimenting him vocally while fleshing out his normally stripped down tracks.

On songs like “Crosses” and “In Our Nature” José and crew channeled 70’s folk, making Swedes sound a lot like America.  Most memorably, opening act Mia Doi Todd joined in to aid in a striking version of “Cycling Trivialities." 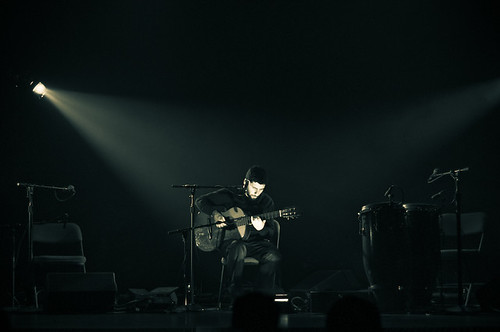 Generally speaking, folk shows can be a far cry from exciting, and the Triple Door confronted this dilemma head on with a brilliant array of colors, effects, and most beautifully, a starry backdrop.

To end the encore, González returned back to what he does all too well: covers. A combination of Kylie Minogue's "Hand on Your Heart" and Massive Attack's "Teardrop" ended the show on a fairly moving note.

Though clearly a talented songwriter in his own right, González can't help but be placed in a spot Jeff Buckley once stood, earning stardom off cover songs. Sure, being famous for reworked tracks is still being famous, but when fans look past original pieces (like the woman who kept yelling for his Minogue remake), it gets a little disheartening.

Hopefully down the line, Gonzalez will be appreciated for much more than his ability to recraft unsuspecting gems and be seen as one of folk's most promising individuals.