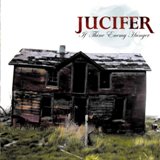 Jucifer are evil. There is no way around this. I've tried various end-runs or justifications, but its not possible. They're just evil. And never in the history of music has a duo produced so much noise. It is ridiculous, but on their third full-length If Thine Enemy Hungers, Jucifer have done an excellent job of becoming the Toyota Prius of metal, adding 50% efficiency and getting more miles to your gallon of rock than you could ever envision. Take that America's dependence on foreign rock!

I suppose if you needed to compare Jucifer to something, you could do it a number of ways. First, they could be seen as an evil, evil White Stripes. Not that the White Stripes aren't evil in the first place, but imagine a world where the White Stripes were much more into Black Sabbath than blues. That's what I mean. Or Jucifer might be seen as the Breeders long-lost wicked step sister, taking the lo-fi indie sound but adding enough metal to it to make the airport security screeners have a panic attack. Or possibly a less emo-centered version of Milemarker. In any case, Amber Valentine and Edgar Livergood do an excellent job of blowing out speakers.

Any band that starts off their album with a 7+ minute epic that crashed back and forth definitely has a chip on their shoulder. "She Ties the Deep" is metal at its purest form, with Valentine's sultry, sleepy vocals poured over the thunderous guitars and drums. You know what to expect from there on, and Jucifer delivers just that: song-after-song of apocalyptical rumble. "Centralia" is mostly driven by Valentine's hushed vocals over barren drums that collide with distorted, sinister guitars. This is the same formula that is heard of "Four Suns", "Ludlow" and "Lucky Ones Burn". If anything, this is the Achilles' Heel of Jucifer: they can easily begin to sound repetitive, a danger of any bi-modally instrumented band. They can overcome this with some clever turns, like the whispered Spanish vocals of "Luchamos" and the surprisingly gentle and, dare I say, tender vocals of "My Benefactor". The same could be said for "Medicated," where the electric guitars are traded for acoustic, making it almost a Kristin Hersh feel. "In a Family Way" has a very strong Nirvana influence, with off-center vocal harmonies and a disturbingly poppy chord progression buried in the noise. However, it is in the sinister where Jucifer excel, and really takes us into a demon dimension on "Antietam." Howled vocals on top of what sounds like a plucked banjo and heavily reworked guitars create an otherworldly sensation that's hard to shake. The album closes with the eerily beautiful "Led," where Valentine stops whispering and belts out some real vocals, drifting up into Lush-like territory until crashing to a distorted end.

If Thine Enemy Hunger is by no means a classic. A lot of it sounds familiar in the first listen, but the band has a way of working its sound into your head very quickly. Jucifer has taken the road less traveled in indie rock, instead discarding the cute or cuddly duo in favor of the evil, sinister duo and they have done it with no regrets. If you're in need of some real rock, you could do a lot worse than popping in some Jucifer and letting the anger flow.