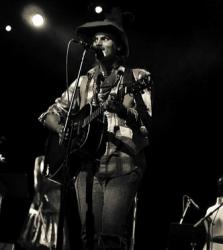 The LP release show for Kay Kay and His Weathered Underground last Monday at the Triple Door was a grand affair. The room was packed with people to see one of the best bands in Seattle celebrate the vinyl release of their epic album. It was probably the largest crowd I’ve seen at the Triple Door (or at least there seemed to be more people standing than I can recall). The band and the venue made the evening feel enormous.

At 8pm sharp, Kay Kay and His Weathered Underground took the stage with 11 members. It might be the smallest I’ve seen the band. Opener J. Tillman quipped that he thought he was asked to play first because in comparison he made the band look even bigger. It was also the best I’ve heard the band sound. What makes Kay Kay such a special band is that there are not any limitations imposed on the music. When you listen to them, you hear elements of vaudeville, ragtime, psychedelic rock, show tunes, Sgt. Pepper-era Beatles, and anything else they can find under the kitchen sink. It’s like they raided their parents’ and grandparents’ record collections and ignored much of their own.

Kirk Huffman is ostensibly the leader. Or at least he sings the lead harmonies on all of the songs, but each player, either rotating or permanent, plays an important part in crafting the band’s sound. Keyboardist Kyle O’Quin and cellist Phil Peterson (who also played cello for Nada Surf at the last show I reviewed at the Triple Door) are the other principle players, the rest is a collective of friends and colleagues that are necessary to flesh out the band’s lush sound. I think I’ve seen as many as 14 people crammed on to the small(er) stages at the Crocodile or Chop Suey. Even with the Croc’s legendary sound guy, Jim Anderson and his expertise, those shows had to have been claustrophobic for the band, and as great as the band sounded each time I’ve seen them, it was claustrophobic being an audience member. The Triple Door’s stage is huge and easily accommodated the band, but most importantly, the crystal-clear sound filled up every inch available in the ballroom.

To celebrate the release of their self-titled, self-released, grand album {order here}, Kay Kay played every track from that record (if my [incomplete] notes are correct, in roughly, if not exactly, the same order) in just over an hour. While that album is grand and bigger than the speakers or headphones you play it through, witnessing the full orchestra live is a really unique experience. It was easy to pick out each instrument at any given time. Keeping up with the lyrics was another matter, though, because both Kirk Huffman and his wife Racheal (who sings most of the backing parts) have soft and gentle voices. Hers is almost fragile, yet so delicate it’s beautiful. Plus, you try singing over two guitars, two violins, a trumpet, a French horn, a bass guitar, cello, keys, and drums.

“Hey Momma” sounded like it would sound equally fresh in a Prohibition-era speakeasy with its ragtime-jazz sound but then the tempo picks up and becomes a Queen-ish rock and roll song briefly, only to abruptly change course a couple more times. It’s a multi-part song that makes use of every one on stage. The short “Into the Realm of the Unknown” relies heavily on the violin and viola parts and could not work without them controlling the tension the song demands. The more psychedelic numbers (“Bowie the Desert Pea”; “Bloodstone Goddess”; “Birds (On a Day like Today)” among others) also fared well under the conditions, with Peterson’s cello and O’Quin’s keyboard especially being brought to life fully.

Somewhere in the middle of the show, Kirk Huffman said that he expected only about 10 people to show up and then exclaimed it was “the best night of [his] life.” It certainly had to have achieved even the wildest ambitions: the band sounded like they were both tight and improvisational at the same time, the sound was pristine and they played to a packed room in the best venue (in my opinion) in Seattle full of friends and fans alike. It very well could have been the best night of his life. He certainly couldn’t have planned it any better.