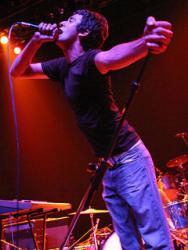 Keane, with The French Kicks

I must confess, I didn't know much about The French Kicks until about a week before the show, when I bought their two LPs and started asking friends what they knew of the band in preparation for an interview that's yet to transpire (stay tuned). Two people whose taste in music I particularly trust assured me that I was in for a treat. With both One Time Bells – the FK's 2002 release – and their current album The Trial Of The Century still ringing in my ears, I set off for the Showbox with my favorite plus-one, the ever-delightful Janay.

Despite the larger venue and all-ages crowd, The French Kicks' live set had all the intimacy of an evening in a dear friend's living room. Picture yourself in a familiar dimly lit room, settled in on an appropriately overstuffed couch, surrounded by a group of your closest friends listening to the most perfect harmonies you could possibly imagine. The French Kicks sound just like their record, but it's even more fabulous in person because you can hardly believe that they're so tight.

If you couldn't tell by now, I've developed a rather acute infatuation with the French Kicks. This crush blossomed to its fullest during their set. Their special brand of strong, sexy pop entrances listeners with romance and bittersweet goodness. Sultry and warm, the French Kicks use their technical proficiency and flawless harmonies to seductively awe you at every turn. Their performance of "Oh Fine," a track off their latest LP The Trial Of The Century, showcased their beguiling charm exquisitely.

Frontman Nick Stumpf, obviously ecstatic to be out from behind the drum kit (a new role for him as of this February), got everyone's hands clapping to set the rhythm for a solid drum machine and shimmery cymbal-driven drums. The driving bass line swelled to meet celestial guitars and delicate keyboards, inciting hip swaying galore. Looking oh-so-stylish in his black sportcoat and Jaggeresque strut, Nick crooned up to falsetto over the rolling drums, topping off what may be one of the most perfect harmonies I've heard in ages. I'm a sucker for good harmonies. It's quite a rare phenomenon and when it really happens, it's magic.

As openers, The French Kicks set the bar exceedingly high. In fact, too high for Keane to match. Secretly, I like it when this happens. It's a bit like an underdog team coming around to beat out the hometown favorites. Now let's be clear, I'm not saying that Keane didn't sound good. They played a beautiful set, impressively meeting the standard set by their record Hopes and Fears.

But when it comes to stage presence, Keane left me with a bad taste in my mouth; a taste strangely akin to bad cheese. Tom Chaplin marred his lovely vocals time and again by riddling the set with over-the-top hand gestures, genuflections, and melodramatic bows at the end of songs. Keyboardist Tim Oxley-Rice failed to help the cause by playing in a manner that strongly resembled a Muppet (in particular, for those of you who remember, the clumsy tuxedo-clad giants from the "At The Dance" scenes of the Muppet Show). Janay called it dead-on when she said Keane live is "like Spinal Tap meets The Muppet Show." I couldn't think of a better description.

I don't think I'll be able to listen to Keane without recalling Chaplin (or, as I've taken to calling him, Lord Fauntleroy) trying to pull off the brooding Brit pop star look with his cherubic face and absurdist sweeping arms. After seeing The French Kicks just moments before, Janay and I were having none of it (although we thoroughly entertained ourselves with banter about Spinal Tap and the Muppets). As we slipped out during Keane's by-now superfluous encore, we both agreed that The French Kicks had won the day.