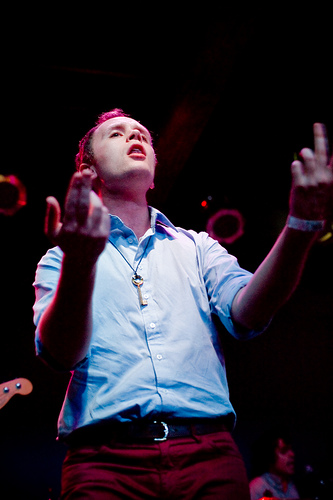 Here’s a group of songs that have pretty much changed my life in the last 10 years. I don’t know what I would have done without these songs, but I certainly wouldn’t have been as happy. Some of them fit into amazing albums, as a perfect little puzzle piece completing a work of art, and some are just amazing stand out tracks. I have probably listened to each of these at least several hundred times. Each song has either a video, an MP3, or a streamable file, so listen along with me! I hope I help create a new obsession, or remind you how much you love a song. Enjoy, and please feel free to post your own lists in the comments!

Nana Grizol “Circles Round the Moon”

This song has been my constant cheer up song from the second I heard it, and I can never listen to it just once. This song will always make you love life.

This is a song that I will constantly argue as one of the GREATEST SONGS OF ALL TIME and certainly one of the best to ever come out of the NW. This song is PERFECT.

The New Pornographers “Letter From An Occupant”

Another absolutely perfect song. I almost got the phrase “the song that’s shaking me” tattooed on my arm. I’m glad I didn’t, but that doesn’t mean I love this song any less.

This song falls under the genre “songs that sound like “Holland 1945″ by Neutral Milk Hotel”, as in, super energetic with horns, feeling like it’s about to bust out of the stereo. It might be my favorite genre. This song is one of the best of this genre.

My Teenage Stride “To Live and Die In the Airport Lounge”

Another favorite genre of mine is C86 jangle, and this song here, by Brooklyn’s My Teenage Stride, is absolutely the best modern replication of that. Not to mention, it’s catchy as hell, and sounds like it should have been a huge hit.

This is one of the first indie pop songs I ever heard (and thus holds a special place in my heart) and no matter where it’s playing, I can’t help but want to dance around in my underwear and sing at the top of my lungs. My cat hates this song (true story!).

Another song I can’t listen to just once, full of absolutely perfect lines, like “the rain falls hard on the city/on every hopeless kitty” and “when you talked about the fall/I thought you talked about Mark E. Smith/I never understood at all“. In the right mood, this song will make me weep.

Perfect melodies+warm organ tones+gorgeous female vocals+song about a cat= a song Keenan couldn’t not love. I truly believe this is one of the best indie pop songs ever.  Also, I’ve met this cat.

Human Television “Saw You Walking By”

Another amazing jangle song. This song makes me want to jump up and down and side to side.  I’ve included this on nearly every non-themed mix I’ve made in the past few years.

There’s something about the “ahs” in the bridge of this song (a la “Shout”) that give me chills. This song is the reason I constantly defend Aldhils Arboretum as my favorite Of Montreal record.

Words cannot express how much I love this song. The line “why don’t you let go of your boy and see/you’ve lost none of your buoyancy” kills me every time. Enough said.

Another in the “Holland 1945” category, from the rock opera about robbing banks to fund a tour to help write the song that will save Texas. This song is the thesis of the album pretty much, where the protagonist meets his dream girl working at the taqueria. Friends of mine have attempted to figure out what the northwest equivalent of “talking to the taqueria girl” might be, but the best we came up with was “bemusing the barista babe”, which just doesn’t quite have the same ring.

The Apples In Stereo “Please”

There’s something about the desperation in the way Robert Schneider starts the song with “Please! Tell me what to do!” that gets me every time. Another one I can’t not jump up and down repeatedly for.

Lemuria “In A World of Ghosts”

The best song about being in a long distance relationship ever, from another of my favorite genres (super fast pop punk with a female singer). Since it’s so short, it often requires many repeated listens.

The Weakerthans “Plea From A Cat Named Virtute”

Are you catching a cat theme yet? There was a time where my cat Mitzi went missing. During that horrid two months (don’t worry! she’s OK now), I was at the height of my Weakerthans obsession, and listening to this song would make me cry (even though it’s generally a positive song). Later, I related to the human character, wondering what my cats thought of me in the midst of deep depression, and when John K. Samson gets to the line “I swear I’m gonna bite you hard and taste your tinny blood/if you don’t stop the self defeating lies you’ve been repeating since the day you brought me home/I know you’re strong” it still makes me tear up. So please, enjoy this video someone made of their thirsty cat to the album track in its entirety, and spoiler alert: there’s a really sad title sequence at the end.