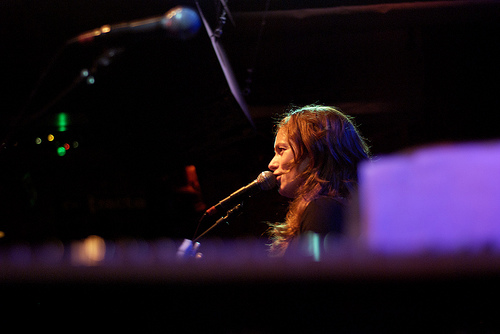 After quite a bit of hmm-ing and hah-ing, I’ve finally come up with my favorite albums of 2009, listed in sort of numerical order, or at least that’s how I feel today, including local favorites BOAT, Visqueen, and indie pop hearthrobs The Pains of Being Pure at Heart!

10. Telekinesis! – S/T – “Coast of Carolina” – TIG favorites on the rise! This album has done insanely well, and we couldn’t be more proud that they played our Imaginary Holiday Spectacular last year.

9. Bunnygrunt – Matt Harnish and Other Delights – “The Limits of Southern Hospitality” – Oh how do I love Bunnygrunt? Let me count the ways. My favorite St. Louis pop punkers put out this great collection of thrash around the bar, scream til you lose your voice, dance your pants off hits. Pray to the gods of punk rock that they grace Seattle with their presence in 2010.

8. Connecticut Four – Tiger Shark – This band was by far my favorite local band of 2009, featuring members of Racetrack and Visqueen, but they played their final show in November. This EP is a great memento of the short lived band, featuring five crunchy, noisy power pop songs with beautiful all girl harmonies. (Sadly, no MP3, but you can hear their song “Fiscal Year” on our latest Imaginary Podcast.)

7. Casper and the Cookies – Modern Silence – “Little King” – I have waxed poetic about this band quite a bit, and the truth is, this album is way better than any album with an 18 minute noise track played only by musicians not in the band has any right to be. The slow songs have deep grooves, and the fast pop numbers are instantly catchy.

6. The Besties – Home Free – “What Would Tim Armstrong Do?” – Another sadly departed band of the year, Brooklyn’s funnest pop band (so I deemed them) stepped up their game and put out my favorite combination of indie pop and pop punk. Their show in Seattle earlier this year was one of my favorites all year long. C’mon guys, reuinion tour?

5. The Thermals – Now We Can See – “Now We Can See” – Oh Thermals. I love you so much. This record for me was an instant hit. It doesn’t quite tug at my heartstrings the way some of the others do, but it’s a wonderful collection of pop sing alongs, and I can’t wait to hear the next one!

4. Afternoon Naps – Parade – “Beach Bums” –  This is the best album all year you haven’t heard. This Cleveland band wonderfully mixes 60’s beach fun with 80’s Orange Juice spilled on my Felt  groovy vibes. The album is beautifully orchestrated, starring ace tone organ lines front and center with gorgeous boy/girl back and forth. I wish I could see them play every day. Let’s start a petition to bring Afternoon Naps to Seattle!

3. Visqueen – Message to Garcia – “Beautiful Amnesia” – This long awaited record was worth the wait. It’s such an amazing collection of catchy and sassy as hell perfect poppy rock and roll. This song in particular has such a wonderful Fastbacks-y vibe in the verses. I hope Visqueen takes over the world in 2010.

2. The Pains of Being Pure at Heart – S/T – “Come Saturday” – So, I pretty much spent this year not being able to shut up about how much I love this band. I spent months making up theories about how this album was a perfect love letter to C86 jangle, with each track a different memento of the era. Of course, it’s not true, but it gave me something to daydream about. If my theory were correct, this track here was the early My Bloody Valentine song, when MBV had more of an anorak meets leather jacket sound than full on aural assault.

1. BOAT – Setting the Paces – “Lately” – Again, this was an album worth the wait. However, you might have noticed a pattern – any time BOAT puts out a record, it winds up at or near the top of my favorite releases. What can I say? I’ve loved every incarnation of this band, but I’m especially smitten with total rock out BOAT. The songs on this album are stronger than ever before, leaving behind some of the fun and silly childhood songs for perfect replications of day to day adult life. This song especially is my jam of the year.

And a few honorable mentions…

Camera Obscura – My Maudlin Career – Though a bit mellower and much sadder than Let’s Get Out of This Country, I still went back to this record over and over again for it’s lush pop hooks.

Fishboy – Nom – A deconstructed take on one of my favorite bands, with only the songs and vocals provided by Fish-lead himself Eric Michener, and the rest recorded without him in the studio. The track “Gabe Saucedo Hates My Guts” is amazing, though probably only if you know Gabe Saucedo (leader of Red Pony Clock). Side note: on tour this summer, I had the fortune of seeing Gabe himself sing all of the things he says in the song, and then shove Eric from Fishboy when he was done. Rumor has it songs are being worked on for a new Fishboy album for next year (and sadly, all the songs they played in Seattle this summer have been scrapped.) I’m sure what they come up with next will be great!

James Rabbit – Perfect Waves – A wonderful hodge podge of joyous insanity. This is what happens when theater kids make pop music and they make it right. Though I don’t love this record as much as I love their live shows, it suffices well for when I can’t see them in a sweaty living room or basement. You can download the whole album online for free, and I highly recommend you do!

So Cow – S/T – I saw this Irish band over the summer and fell head over heels for their stop/start fast jangle. After the show they were convinced they were moving to Seattle, so we’ll be looking out for them in 2010!

What about you? What were your favorites of this year?