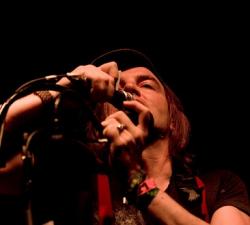 As I stepped outside my apartment on my way to the 2008 KEXP BBQ, I felt a few drops of rain falling. I wisely doubled back and grabbed an umbrella and jacket from my car. Normally a little rain doesn't faze me, but with freshly dyed hair one must plan ahead. Last time I got caught in a storm, I came out looking like Andrew W.K. Heading down to the event, the bus was full of BBQ goers and everyone seemed to be in a good mood, regardless of the impending weather. I wondered if the show would indeed go on if it rained as much as the clouds were threatening.

Arriving at the event, I immediately bumped into a couple of friends from my KEXP volunteer days, and heard about how awesome Greg Vandy's jug band had been. Crap! I really wish I had been there to see them play. The weather was still pretty nice at that point and I wandered into the beer garden to check shit out in there. Lo-o-o-ng lines at the Pyramid beer booths, so I milled around a bit more before being totally stunned by the Saturday Knights! Chris B. has already posted an excellent review of that set, but let me just say I was blown away by how amazing TSK's were on Saturday. I'll definitely be seeing them next time they play.

After the Saturday Knights, I found Imaginary ChrisB and Imaginary Chona to compare notes and catch up a bit before Common Market began. During this time, a non-threatening sprinkle began to fall, which very quickly turned into SUMMER STORM 2008. Thank god for my umbrella! Hipsters were floating past me on swift running rivulets. I noticed animals marching onto the SLUT two by two. I honestly thought they were going to call the whole BBQ off for a second. Undaunted, Common Market launched their set in spite of the downpour, with lots of impromptu rhymes about summer in Seattle.

The beer garden was crammed full of people under the plastic sheeting and small patio umbrellas, trying to get out of the rain. We saw others taking refuge under the Pyramid Beer van. The Common Market set was genuinely good and was a force more driving than the rain, leading most of the crowd to stick around regardless of the weather. I have to say, I don't think any other band could have kept the crowd's spirits as high. The rain eventually slowed to a steady drizzle and then finally stopped altogether, just in time for the Helio Sequence to start
setting up onstage.

I read a really great set by the Helio Sequence just a few weeks ago at SP20 and was a little loathe to cover them in the wake of Chona's fantastic review from that show. Honestly though, they're an easy band to love and an easier band to review; they don't ever disappoint. The sound was a little sketchy at first, especially from where I was standing, but technical issues were resolved early in the set. The Helio Sequence has been playing quite a bit lately and seem very comfortable onstage (if a little tired), cheering everyone with their bouncy, upbeat opener. Drummer Ben Weikel played flawlessly in his characteristic style, although usually he's at an 11 and Saturday he was at about 5/6.

I have to admit that vocalist Brandon Summers seemed a little less energetic than normal as well but they still turned in a decent performance and the audience didn't seem to notice or mind either. In fact, a collective "WHOOP" went up from the crowd when "Can't Say No" began. We also heard "Lately" and the unilateral favorites "Keep Your Eyes Ahead" and "Hallelujah" as the closing two songs. At that point, the crowd seemed really happy, the Helio Sequence was really relaxed and everyone was just in a groove, dancing and smiling a lot. YAAAY. The set ended with much applause and a gracious Helio Sequence left the stage.

While waiting for Joseph Arthur to set up, an enormous, vibrant double rainbow appeared overhead, prompting KEXP DJ John Richards to treat the milling crowd to an a capella "Rainbow Connection" while we waited in line for beer or food. It didn't take long for Joseph Arthur and the Lonely Astronauts to set up. Early into their set, they sang Happy Birthday to G. Whiz (I found out later he was their drummer) and also dedicated a song to "the late, great Bernie Mac" later in the set, containing the lyric "If you're gonna leave, you should say goodbye." A little sad.

The set became more upbeat after that, at times the whole audience was clapping and singing along and really seemed to enjoy the Neil Young-infused country electric style. I gotta tell ya, I thought Joseph Arthur had one of the most beautiful acoustic guitars I've ever seen.

Unfortunately at this point, my friend and I were both tired, damp and a little drunk so we unfortunately were not able to stay for the Dandy Warhols. It had been a good enough day already! But looking at Chona's amazing photos, I have some strong regrets about not staying…