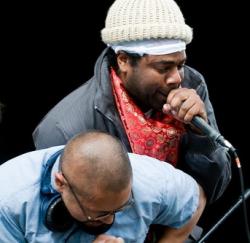 The KEXP BBQ started out fantastic – and then Mother Nature intervened. It was unfortunate that it started pouring just as the third band of the day, Common Market, was beginning their set. That meant that my very soaked ass headed home.

It wasn’t too disappointing of an afternoon, though, as I think I stayed dry for the best performance of the day: The Saturday Knights.

Since I got a review copy of TSK’s album Mingle {review}, it has remained in steady rotation on my iPod. It is still one of my favorite records of 2008. Live, they're even better.

Before I get into how great TSK was, let me first just add that the first sign you’ve made it as a critic (or is it as a publicist?) is when bands ask for your permission before playing more songs. After playing their kick-ass song “45” first, TSK’s Tilson recognized a familiar face in the beer garden: TIG writer (and former publicist for TSK’s label, Light in the Attic) Chris Estey. After giving Chris a big shout out, TSK went into “Count it Off,” and Tilson said they were renaming it “Countin' for Chris.” Later on in the set Tilson asked Chris if he was ready for another song. This made for one of the rare times in live music that a critic could claim credit for a great set.

The Saturday Knights played their unique hip hop backed by a rock band for close to an hour and went through almost all of their songs from Mingle. Only “Surf Song” was left off their set list. For the people who got to the BBQ early, they were treated to another rendition of a Saturday Knights song when the first band of the afternoon, the jug band DJ Greg Vandy put together, The Dexter Street Stompers, covered “The Gospel.” It was awesome.

TSK was backed by a tight and funky band, especially their fantastic rhythm section of Holly Deye (formerly of Lillydale) and Trent Moorman (of Head Like a Kite). Moorman gets bonus points not just for being a badass drummer (even though he unquestionably is) but also for making to the show after being in Los Angeles the night before, 08/08/08, to be one of 88 drummers playing for 88 minutes, beginning at 8:08 pm, led by The Boredoms’ EYE.

Tilson and Barfly were hilarious. Toward the end of the set they put in a few freestyle verses to kill some time while some staffers were trying to get a working microphone for their DJ, Suspence, to add some harmonies to “Motorin’.” When they finally got it working, Barfly commented that he loved the crowd because they were even “applauding technical difficulties.”

Another funny part of the set: Tilson said that he was told that he “was supposed to dedicate a song to [KEXP’s] John Richards” but “that’s going to be a problem because I don’t even know who that is.” That song was “Nobody Beats Us,” by the way.

They were funny and loose and had a lot of fun – as did everyone else there. I was upset that I went home soaked from the rain, but I think I would have been even more upset if I missed the Saturday Knights.