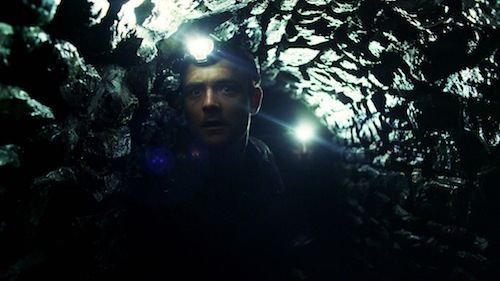 {Kill List opens in Seattle on Friday, March 2, and is screening at SIFF Cinema at the Uptown through Thursday, March 8}

Kill List is one of those movies that you can’t say too much about, or you’ll ruin it for everybody. It’s also really f’ing hard to describe. Part criminal thriller, part horror, part character-driven drama—I don’t know, you guys. I’m still trying to figure it out!

With stark title cards announcing each plot transition (The Priest, The MP, and The Hunchback), and a title frame that’s comprised of an ominous symbol, Director Ben Wheatley sets the tone for something decidedly different.

Starting with a long introduction to family man/assassin Jay and outlining his close relationship with fellow assassin Gal, the film takes its time setting up each character, and then moves quickly through the men’s next trio of “jobs”—which starts out forebodingly, with a handshake sealed in blood.

While Jay’s anger issues are hinted at in early scenes, the first burst of violence (involving a hammer and a man’s skull) is still surprising in its gloriously Scorcese-esque, splatter-filled execution. Not to mention the fact that the victim seems to relish being hammered upon…which makes sense later (or does it?).

By the time they’re halfway through the job, really bizarre shit starts happening, and then continues to build at an avalanche pace through the end—which will leave you saying, “WAIT. What. The. Fuck. Just. Happened??!??!?”

The flip between genres is abrupt, but I fully appreciate trying to shock the audience, and of course (duh), I loved, loved, loved all the (very graphic) bloody gore—and moments of total strangeness.

While I can’t tell you if I loved it or hated it as a whole, I think it bears repeat viewings until I can figure that out. It’s definitely not for the faint of heart, but if you’re craving something completely different, Kill List is it.