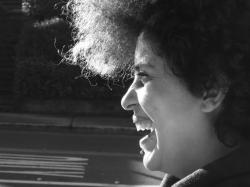 The Old Haunts almost ruined the show on August 23rd for Kimya Dawson, at least for me. No, the local band didn't trash the stage or run off all the fans, quite the contrary in fact — they nearly stole the spotlight from the headliner.

Forget blending genres to create a new sound, an endless array of pedals crowding up the stage floor, or random bursts of unexpected sound. The Old Haunts have none of that; they just have good, true rock 'n' roll as it should be, a three-piece band who showed up to play hard and loud and nothing else. I found them extremely refreshing. Their singer/guitarist Craig Extine grew steadily sweatier, a spray of spit accompanying every few words that came out. He was just as dirty as a rock lead man should be. And I didn't detect an air of self-righteousness once during their set. Sadly that set had to be cut short, as drummer Tobi Vail reportedly had an extremely bad cold. Her drumming was less minimal than Meg White's; she has a bit more to her sound than Meg's one-two one-two. But if I needed a band to compare the Old Haunts to, it would be the White Stripes. Both bands attempt to bring rock back to its roots, and Extine's vocals sound an awful lot like Jack's.

As I said, the Old Haunts almost stole the show from Kimya. They didn't quite succeed, however; how could you not be charmed away by a woman frankly singing, "So I tattoo instructions on my ass/that say 'don't ever put this body is a casket/burn it and put the ashes in a basket/and throw them in the Puget Sound/I don't ever want to be under ground'"? Plus the crowd more than doubled by the time Kimya took the stage. Or, I should say floor, as she opted to sit amongst the rest of us, due to an argument between the acoustic guitar and the sound system which sounded like a bunch of feedback.

With us surrounding her in a semi-circle, it felt like Story Time with Kimya. If you've ever heard her songs, this would be a fitting feeling — her poetry is biting social commentary, stories about friends, fictional or real, and now includes an entire collection of children's songs, primarily casting her daughter Panda as the main character. Talk of Panda filled most of the banter, stemming from the fact the show was 21+ and the baby wasn't allowed. I've seen her daughter in person at the Vera show a few months back, and I would highly suggest checking out Kimya's MySpace for a picture of Panda, as she's possibly the cutest baby ever. [This coming from someone who's opinion of babies is usually not positive.]

Parenthood and having just returned from an extended trip to Europe, both for a tour and vacation, were taking a toll on Dawson during this late, late show. I think she mentioned being sleepy at least a handful of times. Nevertheless, her set was comical, heartfelt, political, endearing, and fantastic — everything you'd expect from Kimya Dawson.