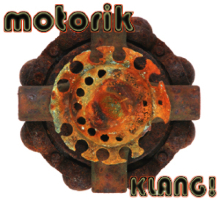 When I first saw Motorik live, it was last month and they were playing a Factory Records tribute night. They covered, amongst others, Joy Division’s “She’s Lost Control” and killed. Even though they were the only band with a female singer that night, they came closer to replicating Joy Division’s sound than anyone else that night, or so I thought. Here, on their debut album, Klang!, the influence of 1980s goth rock is certainly present (think Echo and the Bunnymen, The Cure and Bauhaus) but I also hear parts of Joan Jett and Gang of Four. They have a familiar sound, but one that is easy to get into.

Motorik is a term that some music critics invented to refer to the 4/4 beat when employed by Kraut rock bands. The band Motorik does use that common time signature (who doesn’t?) but the power trio has a sound that is derived from jumpy basslines and punk guitar parts that weave between one another. We’ve heard it before, but still like it.

Klang! was recorded mostly at the Dutchman Studio with its proprietor, Gary Mula, before it was the unfortunate victim in terrible fire at the beginning of the year. Legendary producer Jack Endino had a hand in the final draft, as well.

Singer Sio, who also plays the basslines, has an emotionally hollow voice that fits nicely against the post-punk melodies. I am especially fond of “Robert Palmer”, which has an infectious groove driven by the bass. It’s a garage rock song whose pop hooks are subtle and come from the melody, not the harmonies. “Utopia Parkway” shares its name with the second Fountains of Wayne record but any similarities are buried deep, very, very deep. “It’s Just Sugar” has Sio finding her Siouxsie Sioux in one of the most vocally-intense moments on the album, even more so considering the consistent drumbeat sounds like machine gun fire.

Klang! is an abrasive, dark record but the band is comfortable with their sound. It comes across as jarring and rough but still familiar. I did find it derivative at times, but Motorik was studying the right bands and are crafting their own update of a common sound. Because Motorik translates from German as “motor skill”, I’m going to make a car analogy. Although it might explain Detroit’s financial woes, the point of the auto industry’s continuous existence is not to reinvent the wheel but to make for a smoother and better ride. I’m not trying to suggest that Motorik surpasses the artists they were inspired by, but the end result is an enjoyable record from beginning to end. It doesn’t have to innovate, it just has to be good, ya know?