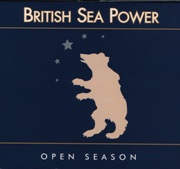 British Sea Power are a little more cerebral than your average Brit Rock band. They’re busy making references to the Spirit of St. Louis and the Larsen B ice shelf, but they’re also making music that shares its inspiration lineage with Joy Division and Echo the the Bunnymen. The Krankenhaus? EP is a teaser for their forthcoming album and it goes along with the bands Fall 2007 tour of the U.S. (well, the eastern states). The 5 song EP is rockin’ from wall to wall, like the Walkmen if they didn’t get so lost in their Dylanesque desire and makes for a great, albeit short, journey.

“Atom Main” is pure Brit Rock, like Muse but with a soul, trying to tackle the confusion of, well, all that science and physics as Yan sings ”I just don’t get it”. The song is chock full o’ crashing drums and guitars, creating a thunderous good time. “Down on the Ground” is a little more restrained, instead taking a bit more of a pop song structure coming off like a more aggressive Rakes song or a little less juvenile Ash track, borrowing a lot from 80’s new wave rock. “Straight Down the Line” is a mellow and filtered pop song while “Hearing Aid” is even more stripped down, like British Sea Power thinking they were channeling Gordon Lightfoot on acid. The EP closes out with the 9+ minute mini-epic “The Pelican – Parts 1 & 2,” which sounds like the sort of song they would burn the venue down with on any live show, ripping and roaring its way through the opening act into the cacophony of musical noises that close the track out.

British Sea Power definitely sound like they have a lot of fun when they record music. Sure, they’re not as downright hook-laden as their brethren Bloc Party or Maxïmo Park, but they seem like they just want to let their music be pure, unadulterated intellectual rock and roll. Krankenhaus? is a great sample of what the band has to come, and it sounds grand.