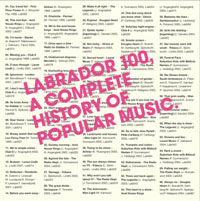 When Sarah Records had their 100th record (actually just the 100th single), they held a huge party, a series of concerts, and shut down the label. Labrador Records of Sweden, who have been compared to Sarah, just released a 4 CD box set, and are carrying on, and on, and on.

Not that Labrador is really all that much like Sarah. Indiepop, yeah. But Sarah Records were fetish objects, in addition to being pop singles; people eagerly awaited not just the music but the sleeve and the insert, featuring the clever writing of Matt and Clare, who were a sort of iconic royalty, inspiring awe and terror in their barretted and stripey-shirted followers. Bengt, Johan, Joakim, Niklas, and Mattias, the empresarios behind the Labrador empire, are much more mysterious; to an American these records seemed to come from Mars, if they came at all. Labrador records have always been a little hard to find.

But we know this music; The Radio Dept. ruled college radio in 2003, but in this country they were on Shelflife (and in the soundtrack for Marie Antoinette). The Legends were as ubiquitous a year later with the amazing Up Against The Legends — on Lakeshore in America, not Labrador. Suburban Kids With Biblical Names? You know them from Minty Fresh, or from your favorite illegal downloads. I don’t think I’ve ever actually seen a Labrador Record in a shop in Seattle.

And now they come all at once. It’s almost too much. 100 tracks! If you’re an obsessive about Swedish pop, you know a lot of these already, but even the biggest completist isn’t going to have some of these. If you’re NOT a Swedish pop obsessive, you’ve been missing out; Sweden is having a bit of a Renaissance these days, and it’s scary how good this stuff is. If you know that other ukulele-strumming Swede, Jens Lekman, you’re aware of the milieu, but this–this is something else again.

It’s impossible to properly review a record like this. It’s too varied, crosses too many lines. You can’t cover each track no matter how much they each deserve it. Suffice it to say: it’s surprisingly various, and incredibly good. The worst you can say is, there’s a couple of OK tracks. But there’s about 90 great ones, and a few are so good your teeth will hurt.

What is it about Sweden anyways? Is it the long winter nights? The long summer days? The frightening good looks? The socialized medicine? Hell, they have socialized BOOZE (Absolut vodka is owned by the government). They do give grants to musicians, which might strike your average starving band in the US as bizarre, but these bands earn it. Whatever it is they’re doing, I’m glad. There are only nine million people in the country, but there’s more good music coming out of the Kalmar Union than the US and UK combined.

The label started in 1998, putting out singles by the likes of dance favorites Club 8. Club 8 were released in the US on March Records, and were a minor smash with their bossa nova stylings. “Missing You”, on this compilation (Lab004), still sounds as fresh today as it did then, like the best St. Etienne song you never heard. Club 8 was Karolina Komstedt singing with Johan Angergård playing the music. Johan was also the guiding light behind anorak favorites Acid House Kings (along with his brother Niklas (Red Sleeping Beauty) and Joakim Ödlund (Poprace, Starlet) and later, The Legends. (It is impossible to untangle these Swedish threads without the use of multiple nested parentheses). The Labrador family came together when they released a new Acid House Kings record, and Johan merged his Summersound Recordings (and studio, where most of these songs were made) into Labrador, and things really started in earnest.

Other early highlights include Aerospace (one of the greatest live bands ever; if you were lucky enough to see them play the old Paradox when it was on University Avenue, or at the 2003 Pop Holiday festival in San Francisco, you know this) with “The Great Divide”; Lasse Lindh, with the dreamy chorusful “C’mon Through”, and the overpowering “Maybe In The Next Life” by Cinnamon (with Bertrand Burgalat and Louis Philippe) (“maybe the best Labrador song” more like).

The Acid House Kings, who started life as a sweetly shambolic twee pop band on March Marigold Records in the early nineties, got themselves a girl singer, Julia Lannerheim, who has a voice like the cleanest glacier-fed spring water you’ve ever tasted, and turned into as magical a pop group as you could imagine; dream of a more angelic Camera Obscura raised excusively on Abba-flavored bon-bons, crank the reverb, soften everything. Your heart will ache with the beauty of it. This is sugary pop but it never sappy, it’s dead serious and fetchingly melancholy. Seriously, “Do What You Wanna Do” should have sold a billion copies. So should their earlier “Say Yes if You Love Me” — it’s almost too good. “Will You Love me in the Morning?” is almost country, but in a Byrds way . If this was a Byrds song it would be on their Greatest Hits. AHK are probably the best group in the set, by a razor. No, wait, it’s The Radio Dept. No, The Legends. No, it’s the Kings.

In 2003 Club 8 recorded a track called “Saturday Night Engine” which was a departure from their discofied bossa sound; it adds a bit of distortion to the jangle and a punchy, crunchy bass drive (like a 1960s 45) to the usual keyboard, and vocal treatment called a (insert techno mumbo-jumbo here, I don’t know it!). It’s a bit of a revolutionary classic, and brought a whole new element to the Labrador sound — and element that turned into The Legends: a sunnier Jesus and Mary Chain. Or an indie-rock Elton John, I don’t know.

It’s pointless to go on about how great The Radio Dept. are, shoegazey wonders, but there is so much stuff on here you’ve never heard. Wan Light have the most delightful soaring arrangements, hampered in the eyes of some by a high-pitched singer who sounds like Harvest-era Neil Young. Apparently they’re the least-popular group on the label, but I love them to bits. “Landmarks and Houses” is warm and insistent, with with some nice drum-led changes and layers and layers of beautiful voices on the chorus. [Ingenting], (which means “ingenting” in Swedish), look formidable with those brackets, but they play great guitar strum pop. They’re the only band that sings in Swedish, but you can sing along with the choruses without a hitch. The Leslies are almost a power-pop band. South Ambulance’s “Die 5times times5” sounds like it could have been on C86, all yearning and ba-ba-bas and handclaps and energetic strums. “Not Today” by Afraid of Stairs bashes together crunchy streams of punk guitar noise with lovely little plucking jangle-guitar clusters that sound like harpsichord: heaven.

All through 2005 my dear heart was playing Sambassadeur in her last.fm stream, and every time I heard them I’d ask “WHO is this again?” because they are so fresh-sounding. Not so much samba as utterly compelling Bats or Luna-style four-four strummers with great singing and . I’m listening to “Ice and Snow” right now and those slow chiming guitars have me almost in tears. The latest sensation on the label is The Mary Onettes, who on “Lost” sound like the band you wish New Order still was. This song has me almost driving off the road as I sing along “When all you do is wrong, when all you feel is wrong, if I could dream awaaaaaaay” and the music swells and Jesus, I’m going 85 miles an hour here!

Even the bands I’m not crazy about, like the countrified Laurel Music, have their moments of joy, like the gently rollicking “Sacred Heart”. Edson, who tread a little too close to the Drama Department for my taste, strike gold with “One Last Song About You Know What”, which out-Sebastians Belle & Sebastian (and contains the great line “I did my best to wallow in my own decay”. And no matter how hard I try to dislike Tribeca, because the guy’s voice is just weird, I fall into another of their songs, like the brilliant “Her Breasts Were Still Small
” (about losing his virginity, not pedophilia), and by the end of it I am forced to admit that his voice isn’t weird at all, it’s PERFECT.

Is there a Labrador sound? There are fifty of them. Common elements are high sweet girl vocals, or rich baritone boy ones, horns, handclaps, strummy guitars, ba-ba-ba backing vocals, and lots of atmospheric keyboards. Maybe some fuzzy guitars too. And some chiming ones. Maybe not all at once. Maybe not at all. The production is probably the most cohesive element; there is definitely a Labrador vocal treatment. The biggest thing going for them, though is the songwriting. It’s all so good. Little things that can turn a so-so song into genius, like the phrasing of the backing vocals’ “you can keep your love away from me, you <pause> can keep your looooove” in the Loveninjas’ “Keep your Love”. This is what sets Labrador — and Sweden — apart. These people just ooze pop greatness. You could play half these songs for your mom or your snotty niece or your hipster barroom friends, and they’d all like them. It shines out.