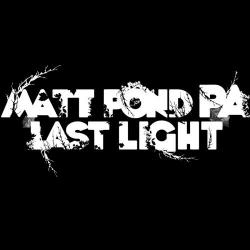 It seems that Matt Pond PA thrives on surprises. Last Light, is (surprise!) the band's 8th album, which may lead you to question where the other albums are. I’ve come across them in cracks over the years: I found their 2004 album Emblems mixed among AOL start-up discs at a thrift store. Upon first listen, Emblems didn’t seem to offer any really shining moments, but after a month’s residency in my CD player it became apparent that nothing stuck out because the whole disc was so good.

Last Light proves that Matt Pond PA are no longer wanting to sit in the cracks. The album opening title-track attempts to ditch any pre-conception of what you think a Matt Pond album is going to sound like. Acoustics guitars and woodwinds are jettisoned in favor of layers of electric tones and a driving 4/4 beat. This same energy goes on to fuel “Honestly” and “The Crush” to moments of musical greatness and ingenuity.

The problem with these moments is that they may stick out a bit too much. Last Light suffers some bi-polar moments as Pond awkwardly transitions from rock anthems to lounge-like piano ballads (see transition from “Honestly” to “Taught to Look Away”). He also, in the spirit of reinvention, tries to add too much pop to the formula and comes up with songs like “Sunlight.” This un-evenness creates an opposite effect to Emblems: on that album nothing seemed too amazing because the whole album was quite good. On Last Light, Matt Pond PA’s triumphs seem to illuminate his mistakes.

But thankfully, Last Light also contains some middle ground. Album enders “Giving It All Away” and “It’s Not So Bad At All” seem to return us to the Matt Pond PA that we’ve known (or not known) for seven albums, and give us hope that maybe the band will stop trying to surprise us and just do what they do best.