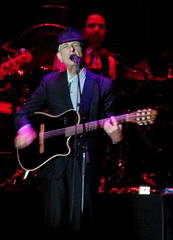 Shortly after 8:00 p.m., the house lights went down and nine figures sauntered onto the stage to join an assortment of instruments. One could see a series of silhouettes, but none appeared to be the anticipated songwriter who last played in Seattle in 1993. A few seconds later, Leonard Cohen ran, yes, ran onto the stage in a gesture of youthful enthusiasm. At the age of 74, Cohen is just as sophisticated and impressive as he ever was. Three and a half hours later, his set concluded with rapturous applause and a packed audience containing the aging and the young, with mouths agape.  This performance, by one of the few living legends, was as astonishing as anyone could have hoped for.

Opening with “Dance Me To The End Of Love” and closing with the unanticipated “I Tried To Leave You,” Cohen raspily crooned his way through a set that consisted of a career-spanning 26 songs. Every facet of his catalogue was at least intimated upon, from the well-known tracks to relatively obscure ballads, the stark folk of his early years to the smooth jazz rhythms of recent albums. The differing periods and styles were intermingled in a set that worked surprisingly well.

Leonard Cohen these days is biscuit thin and classically attired in a suit and fedora; he is weathered and grey, yet remains improbably spry. His identity of the immortal poet was even more striking in the flesh. With wit, humor and candor he performed his repertoire with eyes closed or while on bended knees. His compositions were incredibly captivating no matter what the arrangement depicted. Two musicians circa I’m Your Man were part of the touring group, Roscoe Beck on bass guitar and Bob Metzger on electric guitar. The only unfortunate aspect of the performaning band was the inclusion of a saxophone player and three backing vocalists. Their involvement in the songs was admittedly corny. Despite this, Cohen belted out his lyrics with such assurance that he could have had about anyone singing or playing alongside him.

As far as the crowd-pleasing material was concerned, Cohen gracefully waltzed through renditions of “Bird On A Wire,” "Tower Of Song" “Suzanne,” “Hallelujah” and “Famous Blue Raincoat” without any missteps. For the esoteric crowd and the obsessed fanatics, he brought out marvelous versions of "Who By Fire" and “The Gypsy's Wife,” as well as a breathtaking spoken word recitation of “A Thousand Kisses Deep.” All the while in his usual classy manner, he introduced his entire ensemble twice and referred to the audience as ‘friends’ numerous times. At the close of the final encore, the performers lined up at the front of the stage and bowed before the audience only to be greeted with a din that was quite staggering.

It has been fifteen years since Leonard Cohen’s last US tour and he is apparently working on new material. His voice is still in fine form and he doesn’t appear to be slowing down. If anything, Cohen appears to be thoroughly invigorated by his current tour. If he is truly catapulted by the momentum of his live shows over the past year, one can only hope that he records another collection of poetic ruminations before too long. 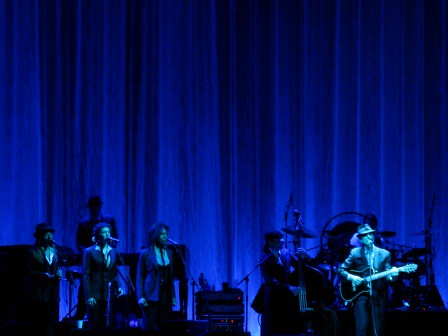