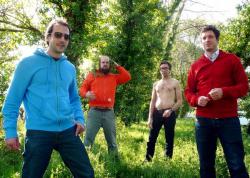 Upon arrival at Neumo's Friday night, we found that the (unannouced) first band has already hit the stage, local Seattle band Das Llamas. Apparently they only found out they were playing this show two days beforehand, and they weren't even on the poster. My first impression of them was The Fall meets Animal Collective, but as the set went on I realized they draw from so many different influences, channeling the Black Angels and Wolf Parade at times. There was a lot of Joy Division in there, with heavy drums and heavier bass lines, with lots of good energy, and also a decent crowd for this band, considering it was so early in the set.

I was honestly surprised at how much I really really liked Das Llamas; it's not often that I'm so into an opening act I've not heard before. The majority of the guys in the band looked very young to me, but then I realized the lead vocalist is that dude I've been seeing at the Cha Cha for so many years. Ok, I knew he was in a band but I never saw them and honestly never expected it to be this good! My friends all agreed, Das Llamas is a very together outfit and they should go pretty far.

Next were the Dodos, who I also didnt know from Adam. They started out with just a single trombone (there just aren't enough horns in indie rock today), then the drums came in, pounding steadily and fast, like a rapid heartbeat. Dude was just tomming on the drums, it wasn't a full kit. Trombone kid then switched to accoustic guitar, both guys were singing different parts. The second song was more fast-paced than the first, again with the steady, fast drums and a little classical guitar influence creeping in. The fourth song, "The Vault" has really nice vocals, some afro-carribean beats and nice harmonies. Their last song started out really scaled down with minimalist, hollow vocals. It developed into a rangy, bluesy guitar bit and eventually it dropped back to a no-scale, single note guitar and then the drums kicked back into a frenetic pace. The song went on and on like this, swelling and subsiding, swelling and subsiding, and the audience really seemed to get off on it. It was great. The set got better and better with each song and I was simply amazed that they were only two guys.

The Dodos are only a simple two-piece band but they really pulled off some complex arrangements together. Alarmingly, this band also really reminded me of Animal Collective, although much less esoteric. The Dodos are from San Francisco and signed to French Kiss (same label as Les Savy Fav) only a couple of days before this show. Once again, another opening band I wouldn't mind seeing headline.

Ok, so I'm sure everyone knows at this point, but Les Savy Fav really tore up the crowd at Neumo's. They played album-quality good and the crowd was crazy for them. They have a huge fan-base in Seattle apparently and they didn't disappoint the kids. Frontman Tim Harrington took the stage wearing a stuffed unicorn on his head, which was hilarious. They started out with "The Equestrian," which my non-Savy friend even said reminded him of riding horses. During this song, we actually had to hide upstairs, the crowd was so intense. They followed "Equestrian" with "Patty Lee," which is my favorite song and it couldn't have sounded any better. People were dancing and singing everywhere, even in the balconies, which is unusual for a Neumo's show. The band remained true to form all night: creative, energetic, degenerate, and cacophonous, with lots of chunky beats and bouncy, rolling guitars, high energy and just a lot of fun in general.

Les Savy Fav really have their shit together, as they should for having been together for so long. Dude was all over the audience and even up into the sound booth; he's like a cult leader with his wacky, mad-scientist hair and it seems like a lot of this crowd would follow him anywhere. The venue was packed to the gills and it was easy to get carried away by the fever pitch swelling all around me. I don't think I've ever seen an actual mosh pit in the normally tame Neumo's. They encored with "Who Rocks The Party," which was great and seemed to go on forever, and at the end the guitarist was high-fiving all the audience members up front. It was hilarious.