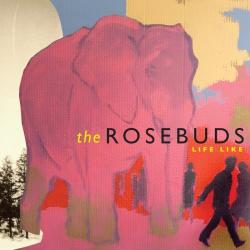 Listening to Life Like, the latest album from the North Carolina rock band The Rosebuds, it is obvious this is a band with a comprehensive understanding how music is made and crafted.

My favorite record of 2007 was Imperial Teen’s The Hair the TV the Baby and the Band (also released by Merge Records) because it was a pop record made by adults for adults; you could sing along to the songs but the lyrics showed an intellectual and mature depth that is uncommon in a lot of pop music (and trust me, I listen to – and enjoy – a lot of it). The Rosebud’s Life Like feels the same way. It is not quite as immediately accessible but it is equally satisfying and challenging.

The Rosebuds are the married duo of Ivan Howard and Kelly Crisp. They call North Carolina home and they recorded much of this album in their own studio, with the help of some friends (including members of Portastatic and Bon Iver’s Justin Vernon). Whereas their 2007 album, Night of the Furies was a much more synthetic pop record, this one, Life Like is a much more “natural” effort. It is a somber and melancholic album that is subtle but still has plenty of hooks. In mid-November, the time I started writing this review (I began listening to the album steadily two weeks prior), this record is the soundtrack to my autumn.

Life Like opens with the title track and it opens wistfully enough until a heavy bass line and steady drum beat kick in. Howard sings in a detached monotone voice that exudes little emotion until he briefly lifts the lyrical hook from The Rolling Stones’ “Get Off of My Cloud” as he sings (with her response to his call) “Wait! You! I’m a man, you’re the beast”. He reconciles “…consider my life, I’m wild but I’m not free.” Crisp provides the atmospheric backing harmonies in a track driven mostly by a twirling guitar part throughout the entire track.

That’s followed by “Cape Fear”, the most upbeat pop song amongst the ten on Life Like, and that is also heavily lyrically (but not really melodically). Taking its name from one of film’s great revenge tales (the 1962 version with Gregory Peck and Robert Mitchum is preferable to the 1991 Martin Scorsese edition with Nick Nolte and Robert DeNiro, for what it’s worth) where a released convict haunts the family of the person responsible for his incarceration. This song is a story of a catfish with a large appetite. Crisp sings of “a baby catfish to be fed, I turned him loose instead” and then “heard another catfish ate a man; got a search team going in; shake shake shake all right”. The song works so well because the harmonies are so catchy.

My other favorite track is “In the Backyard”, which closes the record. It reminds me of a less synthetic Depeche Mode track (and I mean that as a compliment). Ivan Howard sings of an Ouija board over some ghost-like backing harmonies in a really dark (but remarkably catchy) song. He introduces it by saying “some folks say it’s just a toy but that game will take your soul away, I heard my mother say it, it’s a gateway to the underworld” but where “Jim Morrison talked again to all the goth kids from his grave”. The organ/keyboard parts are upbeat but still haunting for the melody to fit the harmonies on this track. It sums up the atmospheric (and emotional) darkness of the entire thirty-some minutes nicely.