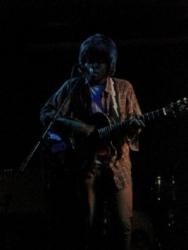 Lightspeed Champion were one of the most charming bands I’ve seen in the past several months. It’s too bad that Chop Suey wasn’t very full when they went on at 10:30. I love the fact that Chop Suey has early set times during the week but on nights like this I couldn't help but think more people might have be en around later. I'd estimate about 100 people were there when Lightspeed Champion took the stage, and I was amazed at how charismatic frontman Devonte Hynes and company could be even with so few people in attendance.

Lightspeed Champion generally hail from the UK but have roots all throughout the US; Devonte Hynes was born in Houston but raised in Essex. Devonte’s trademark fur hat was in attendance and in place as well. Their music, while firmly in the British pop tradition, is more akin to the styles that came from mid-ninties Saddle Creek releases; indeed, it was Mike Mogis, who has produced the likes of Lullaby for the Working Class, Bright Eyes, and Rilo Kiley, who produced the band's record in Omaha. The live show confirms they've taken his direction and run with it.

Their performance was clean and yet conveyed a ton of emotion throughout the show. Songs like “Galaxy of the Lost,” “Tell Me What It’s Worth,” and “Midnight Surprise" were performed brilliantly with sweeping structure, majestic, grand, and beautiful. Their instrumentation included guitar (electric and acoustic), bass, violin, and drums, all of which contributed to their unique, touching style.

After the full set, Devonte announced they were through with their set list and would now play an encore. I'm always impressed with bands that forego the traditional jaunt offstage only to return, despite not playing to a full club. Lightspeed Champion began their encore with another surprise: the Imperial March and Main Theme from Star Wars. It was awesome. Every person in the crowd lit up with delight at the performance of this well-known and oft-hummed and whistled theme. A couple more songs and that was the show.

Overall, it was a big surprise, the quality of the musicianship and charm of this little band from the home of pop-music. I’m only disappointed that more people couldn’t have been there to witness it. Possibly next time…