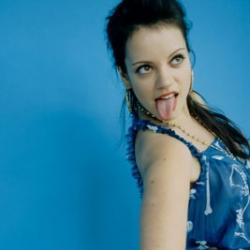 Lily Allen, with the Bird and the Bee

Lily Allen’s one and only album, Alright, Still may run less than 45 minutes long, but it has launched thousands of critical words about it — not bad for an artist whose entire output doesn't even equal many people’s lunch break. As the cliché goes, people either love or hate her in equal measures — I’ve yet to meet a person who says she’s “just alright” — and full disclosure forces me to confess that I unequivocally fall into the former category.

Alright, Still is easily one of my favorite records this year. Each song could potentially be a radio hit (and in my perfect world, they all would be). I find her personae likeable and her songs witty, clever, catchy, and funny. She seamlessly melds elements of jazz, reggae/dancehall, funk, R&B, and pop into her tunes in ridiculously catchy ways. Having said that, I went into to her show with deep ambivalence. Most of the reviews of her appearance at SXSW were lukewarm at best (more than once rumors circulated that she was so inebriated that she was forced to cancel all of her interviews). Shortly after that, she wrote on her MySpace blog that she wanted to cancel her US tour because she felt tired and didn’t think it was necessary to achieve success in the US (in the context of her writing it almost appeared contemptuous of her audience).

Maybe it was the God of Lowered Expectations at work, but Lily Allen’s set last Monday night was simply phenomenal.

Opening the night was the Bird and the Bee, a light, fun pop band from LA. I really admired their eponymous album; it sounds like what the next Mirah record might sound like if Regina Spektor were to sing all the songs. The instrumentation has a modern pop feel with soft and sweet harmonies, really funny and a tad risqué.

In the song "F*cking Boyfriend?," Inara George rhetorically asks the question "Will You Be My Fucking Boyfriend" over and over again. It apparently worked, as she was mobbed by countless people at the merch table. The record lists two official members, George and Greg Kurstin, but the band brought many more members in tow, including two backup singers resulting in a much richer and fuller sound.

When Lily Allen took the stage around 10pm and, as expected, she chain-smoked and drank through much of the set. As a matter of fact, as she lit up her first cigarette, she quipped that she wasn’t really smoking and added, “damn, theatrical smoke tastes good!”

Her band was tight and consisted of a guitarist, bassists, keys, a drummer, and a three-person horn section (which brought out a jazzier sound than the one that came across on her album). They were, at one point, joined by Lynval Golding of the British ska-punk band The Specials for a Specials cover. She (repeatedly) said it meant a lot to her to be able to have Golding join her band, and it was a Seattle exclusive as he calls this fine city home.

It was one of four covers in Allen’s set (which also included every song on Alright, Still if my counting is correct): Blondie’s “Heart of Glass,” Keane’s “Everybody’s Changing,” and The Kooks’ “Naïve” – an alt-rock radio favorite these days.

Between songs she took generous sips of Jagermeister, which livened up her chit-chat. She referred to Jack Black as “the great prophet” and quoted him by referring to one song as “a big ‘fuck you’ to the man.” It was for “Everything’s Just Wonderful,” but really, it could have been about any of them, as each of her songs is in one way or another a big ‘fuck you’ to the man. The loudest applause, though, came when she was listing off grievances she had, most of which were relatively petty, until she got to George Bush and said he was doing “a fine job of fucking up the world.” Sure, she was vulgar and juvenile, but also entirely entertaining.

Another bit of comedy came when she introduced “Friend of Mine” and said it was about a girl she was friends with years ago but betrayed her. She said she had no idea where she was now, but not playing in front of over a thousand people in Seattle. Then she thought she might be pregnant and smoking crack.

When it was finally time to for the Showbox to turn the overhead lights on, she had been on stage for an hour and twenty minutes — and was compelling every moment she was onstage.