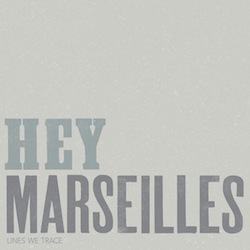 Lines We Trace opens up suddenly, with all kinds of ache laced through the echoes of a well-worn Andrew Bird album, cut beautifully with strains of Matt Bishop's unmistakable vocals. It's a powerful track ("Tides"), the line I would trade ten thousand days / for one more hour with you immediately vaulting the listener into a pile of Polaroids, to sift through the sweet nostalgia of every relationship they ever had that didn't quite work out. As sudden as the physical start of this album is the realization that Hey Marseilles has matured, with a new depth to their composition, yet with that familiar I'm-telling-this-story-right-to-your-soul songwriting that we've come to know and love.

For those who have gotten by these last few years on live shows, the occasional single release, and 2008's To Travels and Trunks; Lines We Trace is the equivalent of a new apartment in a town you love: you know the roads around it like the back of your hand, but you've never seen the sunlight through the windowpanes quite like this. Everything that's wonderful and familiar about Hey Marseilles is present — a profound earnestness, those unmistakable chord progressions, the orchestral swells and pitches — but delivered with new perspective, more wisdom, and perhaps the sight of a first laugh line in the bathroom mirror.

Simply stated, longstanding fans of the band and new listeners alike will welcome this addition to their library with open arms. Standout tracks "Bright Stars Burning" (the album's single) and "Looking Back" are decidedly Northwest, with scattered time signatures and a layered, big-room sound; "Madrona" takes the gazing-out-the-train-window-soundtrack game to a whole new level. Beautiful remasters of 2011's release ("Elegy" and "Cafe Lights") are embedded nicely at mid- and late-points throughout the album, akin to hearing a longstanding favorite at perfect points in a live set.

There's a lot to discover here, and you'll find your own words for it soon enough: Lines We Trace officially drops on March 5th, and is available for preorder everywhere today. On the live front, Hey Marseilles will be celebrating with a tour that runs across the country and back from the end of February to mid-April. The band will be making a stop at our own Showbox on March 1st with Y La Bamba and Pollens {tickets available here}.