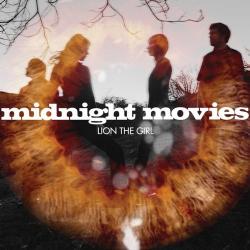 I suppose I need to apologize here and now. This album, Midnight Movies’ Lion the Girl has been sitting on my desk for the better part of six months now. It is not like it was buried and lost – no, indeed it has been on my iPod for all that time, I’ve heard songs from the disc periodically, heck I might have even paid attention a few times. That being said, it has taken me quite a long time to come up with anything to say about Lion the Girl except that I can’t find anything particularly wrong with it. It is pleasant, dreamy and more fun than their eponymous debut. If you like late 80’s/early 90’s shoegazer rock, then you’ll like Midnight Movies.

Lion the Girl starts off strong, as “Souvenirs” is a delight, creating a glimmering soundscape eerily similar to early Lush songs, but not so similar thanks to the more luxurious voice of lead singer Gina Olivier. This can be heard again on one of the high points of the album, the rollicking “Coral Den." This changes a bit on “Patient Eye,” although here you can hear their love of My Bloody Valentine – again, however, the balance between facsimile and tribute is struck. Midnight Movies has a bit of the sound of late Boston’s band Tribe, with the thick guitars and bass mixed with Gina’s seductive vocals. This is especially apparent on “Hide Away,” a song that reminded me of Tribe’s “Joyride” for the first time in years. This is likely just the influence of post-punk pioneers Siouxsie and the Banshees over both bands. “Parallel Paramour” has that same Siouxsie feel, but with a little more 60’s garage rock feel scuttling around in the background while the closer “Two Years” takes on a happier sound, but still full of the post-punk psychedelic sound that is their obvious starting point. “Lion Song” and “Bell Tower” tackle a little more of the slow shoegazer pieces of My Bloody Valentine, with howling guitars over the languid beat.

If there's anything that can be said about Midnight Movies is that they’re still looking for a way to break free from their forebears. It's hard to separate where exactly their influences end and Midnight Movies themselves begin, and in a sense, that is what makes the band so difficult to corner: they lack any fingerhold on what they actually are. You hear the songs that fill Lion the Girl, but you’re not entirely sure if you heard something new, or just the echo of scenes gone by.