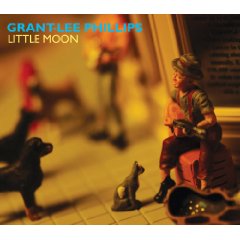 Uneven albums by your favorite artists are like spending a uneventful, sort of boring evening with your very best friend. You could criticize the night, but you’re still really glad she was there anyways, and it’s not like you would take those hours back.

Perhaps owing to where Phillips lives, Little Moon is pretty damned slick for a Yep Roc roots record. Its Los Angeles-based charms brings back a time when mainstream pop artists like Nilsson, John Phillips, and Randy Newman seemed to touch on the rosetta stone of deep and wide traditional American songcraft, pre-rock as well as dazzling immigrant cabaret, SW sound-mosaics and city bar fugues. Its best song, “Strangest Thing,” is an epiphany of listening to Johnny Cash, and giving a damn why the man wore black. It’s transcendent, contemplative, and an adult sugar rush of appreciation that will be on every adult music fan’s mixtape of the year.

As I write this, the title track of Little Moon burbles through my head, completely irresistible, and the timeless “The Sun Shines On Jupiter” or “Blind Tom” among the record’s dozen makes this the album you can buy for the Tom Waits fan that has everything Tom Waits but doesn’t need anything fake Tom Waits, or people who remember Loudon Wainwright lll in his prime, or young fans of any of the 70s marginal-rock icons listed above. I would have loved to have at least a couple more numbers as melodically resplendent as the uptempo “Strangest Thing,” and though the second half of Little Moon seems a little too relaxed, Phillips’ warm, steady instrument of a voice is hardly one I regret spending any amount of time with.