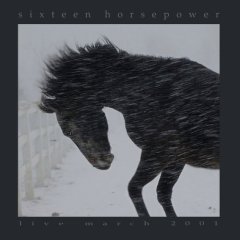 Sixteen Horsepower was an incredibly talented band that combined a dark southern gothic sound with the singer’s deranged religious perspective. This new offering was actually recorded in 2001, just after the release of the absolutely stellar Secret South, their third and best studio album. It showcases the band at the height of their powers, both lyrically and musically and marks the apex of their career, just before David Eugene Edwards plunged a little too far into his disturbingly haunted Christian views, a gradual shift that eventually broke up the band and sent Edwards on to form another group, Wovenhand, who has put out a string of releases since their inception in 2003.

The band has created quite a cult following over the years; in fact the demand for more material has brought about the emergence of several releases since Sixteen Horsepower finally imploded in sincere hellfire. This new live 2xCD is no novelty recording, however. They were incredible live and this posthumous document is all the proof that one needs. Most of Secret South is performed faithfully, yet the live delivery adds a razor sharp degree of intensity to the songs. “Cinder Alley” blazes with unrestrained ferocity and “Poor Mouth” damn near blows the roof off of the house as the final strains of overdriven guitar finish the live version. David Eugene Edwards provides his characteristic tortured vocals in earnest, but this is before his evangelical beliefs became frighteningly apparent. At this stage it was still unclear whether the lyrical content of his songs was serious or if it was merely a source of reference.

There is also the inclusion of a host of songs from their first two albums. Those tracks blur the religious intent even more, but are no less sinister. “I Seen What I Saw” is a dose of secular black humor, something that was lost shortly after the release of their first album, Sackcloth ’n’ Ashes. “Haw,” from their first EP, is another early song that is a particular highlight in this collection, one that showcases Sixteen Horsepower’s unique sound of midnight twang and unabashed yet sophisticated distortion.

Live March 2001 is rounded out with a few extremely well done cover songs. The band tackles Joy Division’s "24 Hours" and arguably does a better version. They also perform a rendition of the Leonard Cohen classic, "The Partisan," which is simply gorgeous. It is a shame that Sixteen Horsepower had to dissolve, but their legacy is strong and this live recording is a reminder of how truly wonderful and original they were in their time. Whether or not one agrees with the personal beliefs of David Eugene Edwards, his conviction is impressive and it is impossible to deny the sheer brilliance of these songs.