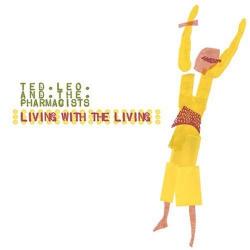 Living with the Living

I can usually tell what bands really affect me most by trying the following exercise. If I actually had a tiny iota of musical talent, what do I think my band would sound. Well, nine times out of ten, the answer that pops into my head is Ted Leo & the Pharmacists (the other one time? I don’t know, Captain & Tennille?) There is just some sort of visceral connection I make with Ted’s band; I can’t really place it, but they usually just make music to which I find I can’t stop listening. That being said, Living with the Living does not disappoint. It finds Ted Leo at his most biting and political, along with most diverse and experimental, leading to a rock and roll treat for the whole family.

I get the impression from the get-go that Ted Leo is not a big fan of Dubya and his little war in Iraq. At least six songs on Living with the Living can be tied directly to war, the military, or the covert government. This anger has put Ted and the boys on their most aggressive and punk album path to date as they make sure we know that, well, war is bad. Just listen to “Bomb.Repeat.Bomb,” Ted’s most biting indictment of the war on the album. It's a great piece of sarcastic advice to bomber pilots, reminding them that, "When the crying starts, you won’t have to see their bloodshot eyes turn red" and that their mission is to "Pretend it’s television when the good guys always win." This is the closest Ted Leo has sounded like his more hardcore pre-Pharmacist band Chisel, right down to the howled vocals and wall-to-wall guitar and drums. When Ted continues the social commentary on “Army Bound,” the song is much more subdued and restrained that “Bomb.Repeat.Bomb” but the criticism is just a biting ("Make sure you keep your bunk beds made/one day you’ll see your bunker was the grave"). “The Lost Brigade” is epic for Ted Leo, clocking in at over seven minutes, but the taut guitars and Ted’s passionate vocals keep in interesting as it drifts along.

The album isn’t entirely commentary, as much of Living with the Living is populated with the excellent power pop rock that Ted Leo seems to have perfected. “Sons of Cain” is remarkably catchy – probably the equivalent to Shaking the Sheets’ “Me & Mia” for the it-should-be-a-hit quotient as it’s a real foot-stomping rocker. They put together a great summer gem with “Who Do You Love?” that sounds like a more punked-up Elvis Costello & the Attractions song right down to the staccato guitar riffs under the vocals that break into the melodic and infectious chorus. The same could be said for “A Bottle of Buckie” where we find Ted Leo being surprisingly charming (and slightly Irish). Ted continues this bit of his gentler side on “The Toro and the Toreador” where he mixes his biting lyrics (why would you give power to the one’s who rob you blind?) with the rock ballad form.

There is definitely a vein of more hard-hitting rock on Living with the Living, the guitars are more prominent and mixed with more bass than the last Ted Leo album and this is evident on “La Costa Brava,” a song that borrows from both the Cars and the Replacements while still keeping that signature Ted Leo sound. He has definitely been breaking out his early 80’s post-punk lately too, “Unwanted Things” is pure Clash with its dub beat and driving bassline. It is a completely new sound for the Pharmacists and works remarkably well. The closing song “C.I.A.” is pure Ted Leo & the Pharmacists, drilling us with guitars and drums while Ted sings with his signature brisk vocal style over the music – even if you’d never heard it before, you’d know this was Ted Leo without a doubt. Therein lies the Achilles’ Heel of Living with the Living: Ted rests on his laurels a little too much, bringing us what we’ve grown to expect from his band for the last three albums. It is a bad thing as such, but Ted seems to have figured out what we like and sticks to it most of the time.

Living with the Living is quintessentially Ted Leo. Sure, he’s more political than his last album and maybe he’s taking a more forceful bent towards his music, but there is no mistaking that this is a Ted Leo album. In a sense, he is fulfilling his destiny as the American Billy Bragg as a post-punk rocker that is blessed with a pop sensibility and a witty tongue. There are worse fates than that to befall a musician and although Living with the Living isn’t the next Nevermind, it produces what it is supposed to: rock music that makes you want to rock as much as it makes you want to sing along.