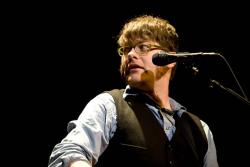 I had only heard good things of Portland native band Loch Lomond from an aficionado folk fiend friend at Reed College. There were A LOT of people and instrument onstage at the Moore on this night. Saxophones, accordions- they had it all and they certainly knew how to use 'em!

I was blown away by this act that was virtually unknown to me. They were a very modest lot, repeatedly and emphatically thanking Decemberists for taking them on tour, with frontman Ritchie Young candidly explaining “We're just a little unknown band from Portland”. I can't imagine this will last very long with all the publicity they'll be getting from touring with a band as prolific as the Decemberists and having tunes as ambitious as theirs. Individually, it was clear to see that every single musician on stage was fully versed in the art of music.

Collectively, it almost hurt me how beautiful their sound was. I've since had the opportunity to sit down and listen to a couple tracks on headphones, but their live show just speaks volumes to the immensity of their craft.

I've witnessed the Decemberists live show so many times, but have yet to hear a rendition of
“California One Youth and Beauty”… but I won't hold grudges. Meloy, his snappingly witty and charming self per usual led the way through many many songs that have come to be classics for so many people of the zeitgeist. Included in their set were several tracks of their more recent “Crane Wife”, but they also got around to playing a beautiful rendition of “16 Military Wives” prefixed by an awesome impromptu solo by the talented and widely grinning accordionist/pianist/singer Jenny Conlee.

Antics of the night involve Meloy leaving a garbled song/message to a contact on an audience member's iphone, jostling the crowd into clapping and screaming at his command, and even humoring an audience member by having drummer John Moen record a song on his fancy schmancy video camera. Hopefully the photos well illustrate how bitingly hilarious this kind sentiment on his part was.

It was a beautiful night of gorgeous sounds in early December… ironically a month that the band has never released an album in! The audience, as far as I could tell (even up to the third balcony) were thrilled to be in the presence of such fine musicians and why shouldn't they be? Decemberists are quite possibly the best indie rock band of the 2000's.

(screaming into an iPhone)