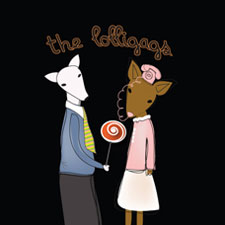 The Lollygags are an electronic duo (names: Dallion Lollihag and RG Lollifag) that takes pop music and turns it on its head by dealing with topics outside the norm from most contemporary music. Revenge, stalking, and unbridled lust are all themes that come up on this short but whip-smart four song EP. Imagine, if you will, the Dresden Dolls meets the Go-Go’s. If you’ve ever read a fairy tale and thought, “that’s just creepy” (and frankly, who hasn’t?), the Lolligags may very well be your new favorite band.

“Staircase Mystery” has a childish sound to it – and it is about children, and how they adapt to being in a creepy mansion without any supervision. “It’s alright and it’s okay, here we are and we must play; The staircase mystery; No cookies, no cones, no licorice red, the nanny’s dead; we’re beginning to feel that we’re not alone,” Dallion sings over the synth lines. It has all the tension of a Hitchcock film confined to a three-minute song.

In the first track, “Wired Up," Dallion wants to settle a score with an old lover, presumably, but never explains what it is she wants to do, or how she’s going to go about it. She is vague on details. All we know is this unnamed person did something horrible to her and it kept her up all night. She wants to become a person like him so that she can put that same person through the same, or similar, torment that gave her insomnia. The song works because that absence of detail. With the best pop music, we can empathize with it and apply it to situations within our own lives.

Wired is a brief album – it clocks out just past the 12 minute mark – but it's the perfect length. If the album went any longer, the songs would need to differ more aurally than the one before it for the album to work as well as it does. The songs are simple in the sense that they are verse/chorus/verse and not buried under layers and layers of production but are complex in that they also explore deep psychological issues. The Lolligags gleefully enter the macabre.

Like a good EP, it leaves its listeners curious for a full-length but will hold us over in the meantime. It’ll have to.