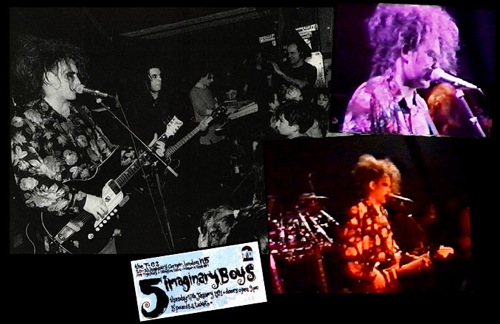 Recently, I’ve fallen into a rabid obsession with The Cure during the epoch where they were floating in uncharted territory between Disintegration (1989) and Wish (1992). Concerning the general musical landscape, it was an interesting time. The bloated gluttony of the ’80s was passing, and the misdirected angst of grunge had not yet taken the country by storm.

Relating this to The Cure, they were still riding high on the unanticipated success of Disintegration and looking towards the future with an optimistic perspective. They had everything in their favor at this point: a stellar band consisting of Robert Smith (vocals, guitar, keyboards), Simon Gallup (bass), Porl Thompson (guitar), Boris Williams (drums) and Perry Bamonte (keyboards), a record company that appeared to offer them unquestioned artistic creativity, a reputation for being the biggest, unknown band in the world – and perhaps most importantly, the wherewithal to take whatever step they wanted to take next.

This was a pivotal time in their career. Were they going to continue in the vein of abject bleakness, or was there some other direction to pursue? As they slowly began performing new material, the former rang true. In January of 1991, the group played an intimate, low-key show billed as Five Imaginary Boys at the The Town and Country II club in London. Here, they debuted four new songs: “The Big Hand,” “Wendy Time,” Away (Cut)” and “A Letter to Elise.” Note that this is well over a year before Wish would see the light of day, and all of these tracks except for “Elise” were previewed in rather different renditions to what we eventually heard in mid-1992.

When the studio versions were released, they had altered lyrics and faster, more driving, uptempo structures. The original versions, however, were melancholy, psychedelic compositions that truly put the official versions to shame. For instance, listen to “Away”, later to be titled “Cut”, as it was originally performed in London. The layers of sorrowful guitar feedback and the mood of this song are quite striking. The much more aggresive studio version is still great, but the early incarnation of this track makes the official one fairly disappointing.

Opening the London show with “The Big Hand” was a wise choice made by the group. The original version has lyrics that naturally suit the dejected, atmospheric feel of the song. Smith mournfully sings the lines “Leaving alone you said, I’m leaving alone,” whereas on the studio version that eventually ended up as a Wish B-side, the lyrics were altered to “Leaving alone, I’m not leaving alone,” thus changing the entire intent of the composition. This has always irked me, as it doesn’t work with the sentiment of the song. Also, the original instrumental version of the song that appeared during the credits of the Play Out video collection is far superior to the officially released melody. Have a listen here. This truly is heavenly music.

Then there’s “Wendy Time,” a track that many fans don’t seem to care for. I actually like the version on Wish, but when listening to the original demo version and the live performance from London in 1991, I am awestruck at why the band decided to turn this brilliant track into much more of a pop song. Listen here to how it was originally intended. Again, the doleful cadence of the song was completely changed when recorded a year later. This first version is slower, sadder and has that classic psychedelia that the band were so apt to include in their music. Lastly, here’s a version of “A Letter to Elise” performed a week later for MTV’s Unplugged program. This song remained true to the original, but features some different lyrics (this version is gorgeous if you haven’t heard it before).

It is a shame, really, because in early 1991, The Cure were well on their way to making a record that was going to be better than Disintegration. If these songs were not tampered with, Wish could have easily topped its predecessor. They likely chose to change directions because of the arrival of grunge and perhaps a desire to shed their gloomy, Goth image a bit – but this decision was truly tragic. If there is some early version of the record out there, I would love to hear it. The “Wendy Time” demo hints at what could have been, while the instrumental version of “The Big Hand” is shimmeringly beautiful. I hope there’s a vocal version of this somewhere in the vaults, and the “Wendy Time” demo reminds me that this band, at that point in time, was merely untouchable.

Within a few years, they lost it all (integral band members, direction, cohesion, sound) and never came close to regaining their power, but this lesser known period in their history is certainly one to cherish.