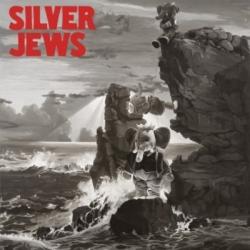 I've probably spent a little too much time lately watching old episodes of The Muppet Show. I hadn't seen most of the episodes in a long time and I wasn't entirely sure what to expect from it all. I have many a fond memory of the show from back in the day when I would watch it on the family TV back when we had maybe 10 stations (and we liked it that way!) As I might have guessed, the guest stars were very hit-and-miss, with my reaction ranging from "hey, that was cool!" to "who the hell is this?"

Now, if you've made it this far, you're probably wondering what the heck this walk down felt-and-string memory lane has to do with the Silver Jews, well, hold your horses already. When I sat down with Lookout Mountain, Lookout Sea, it happened to coincide with my watching of an episode of The Muppet Show that starred none other than Roger Miller. Mr. Miller surely doesn't get the due he so justly deserves, and even when watching his performance side-by-side with puppets I realized that his oeuvre was worth delving back into. This is in stark contrast with other guest stars like, oh, I don't know, Danny Kaye, who you watch in either horror or hysterics, whichever comes first.

And this is where we get to the Silver Jews. If, let us imagine, there is a new Muppet Show, one with modern rock stars and the like, I would imagine that at one point or another the Silver Jews would end up gracing the stage with the likes of Rolf, Fozzy and Kermit (but God forbid Robin). Fast forward 20 years or so, and future Erik might be watching holodiscs of this nouveau Muppet Show with the Silver Jews and have the exact same reaction that I had to Roger Miller, but to the Jews. They are a band that will survive whatever test of time might be thrown at them while the likes of Animal Collective or Broken Social Scene will be relegated to the Danny Kaye Memorial graveyard as passing fancies.

For those of you who might have forgotten, we are in year 19 of the Silver Jews existence, where David Berman has spread 6 albums over that timespan, including the classic American Water. The last time out, the Silver Jews were sounding a little down on Tanglewood Numbers, but Lookout Mountain, Lookout Sea finds them feeling a little more cheery, a little more quirky and generally having a good time as they approach the big 2-0.That being said, if you already like the Silver Jews, you won't be disappointed. If you don't like them, then I ask you, why the heck not? Get with the system.

Berman puts together some of the catchiest songs that the Silver Jews. "What is Not but Could Be If" is a love song of sorts, with Berman harmonizing like a latter-day Johnny Cash as his raspy baritone. There are some good left field turns that the band takes on the album, including the raucous stomper "Aloyisius Bluegrass Drummer", remarkable piece of modern roots rock (and possibly the idea song for my Modern Rock Muppet Show). In that same vein, "San Francisco BC" is a rolling tale of living in bay area with a (now) ex-girlfriend, full of love and ideals lost. "We had sarcastic hair/we used pseudonyms/we got a lot of stares/on the street back then" sings Berman as he unravels the story. Meanwhile, "Strange Victory, Strange Defeat" takes a page from mid-80's R.E.M., twisting southern rock in a mellow evening. "Suffering Jukebox" and "My Pillow is my Threshold" are more typical for the Silver Jews, living in-between modern rock and country, but turning out smooth and rich, just like the closing ballad "We Could be Looking for the Same Thing."

Now, the Silver Jews don't pull any musical punches – they aren't trying to expand into the art rock world that all the hipsters love where music isn't about songs and melody but experiments and pastiche. No, the Silver Jews are just plenty happy making songs that feel timeless from the moment you hear them. Lookout Mountain, Lookout Sea might actually be the most straight-forward pop record that Berman and company have ever recorded and it would be a shame if decades from now it is long forgotten. Where is our puppet savior when we need him?