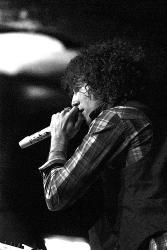 Nobody here likes Louis XIV, so I guess I’ll just skip over them. What I will tell you is that lead singer Jason Hill could not put down the liquor. Enough said.

Before I say anything else, I want it to be known that I totally love Hot Hot Heat. To me, Steve Bays voice is like a sonic Snickers bar. It wasn’t until the moment just before Hot Hot Heat took the stage that I realized I had never seen them outside of the festival environment. A definite crowd pleaser, the perniciously curly haired Steve Bays at one point explained “Holy Fuck! This stage is fuckin’ bouncy!”

Both he and the audience acknowledged this as the band launched into mind rattlingly loud favorites “Middle of Nowhere," “Goodnight Goodnight,” and “Bandages,” along with tracks of the new album Happiness LTD. Though Bays admitted his voice was shot, his “in-yo-face” energy and spirit was in no way lacking.

Birmingham (UK) quartet, Editors, hopped onstage shortly after 10p. Tom Smith’s seductive matter-of fact baritone, emphatic piano standing, and head clutching showcased the grups collective passion for their art and left the crowd surely wanting more. Through the epic “Smokers Outside the Hospital” to 2005 debut The Back Room standout soundtrack “Munich,” Editors managed to maintain their high energy throughout the set despite some very impressive spinning and hopping.

It’s always a treat to get a British band in the neighborhood, and Editors were no exception. I made the 20 mile ride home with their songs still ringing plangent in my head. I couldn’t force myself to listen to anything for at least a day afterwards, that’s how clear I wanted to keep this show in my mind. I walked out of the venue with their music still playing and a happy heart.