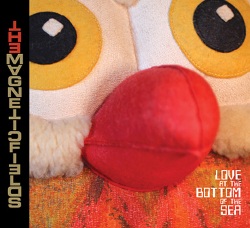 Love At The Bottom Of The Sea

However, there are some obvious twists on Love At The Bottom Of The Sea — starting with the fact that they're back on Merge Records, the label that launched them as DIY synth-pop demigods in the 90s. And for the occasion TMF bring back the keyboards with all the squeaking, squonking, squealing, and the beep-beep-beeps beneath. The sweet fragrance of infatuations crooned and bleated on alt-boom classics like Get Lost and The Charm of the Highway Strip lingers here, but richly infused with the robust LP-learnin' Merritt and friends have been bringing in from late 60s/early 70s pop-folk-AM cabaret on their albums since the immense, ever-expanding 69 Love Songs.

That triple CD, TMF's last recorded release for the mighty Merge, is an interesting comparison with this, the cult leader-and-collective's tenth full-length. That humungous cloud of treats will never stop raining joy on fans, yet Love At The Bottom — after you get past the usual feeling that TMF are first making novelty songs, then parodies of novelty songs, and then "oh shit, these are really good, resonant songs coming off like parodies of novelty songs" — shows obvious signs of maturing, the vocals and melodies more confident and assured than the genre-play on 69.

The band's "regression" to synthesizers doesn't recess the improvements in musical vocabulary TMF first began making on that cultural landmark. Thus, even the slghtest tracks here — the ridiculously weird fantasy of "I've Run Away To Join The Fairies," the curiously "off" macho tone of "Born For Love," the bitter showtune bounce of "The Horrible Party" — are fabulously crafted and lovingly performed. Even though they're not really much about anything.

But what the band (Merritt) is usually on about, brilliantly stacked in the first three tracks — the ironic cruelties of love; the ironies of certain attractions; the impossibility of empathy in a world of meaninglessness besides pleasure within romantic disasters — is adorably skewed through the album's absolute gems. Opening mocking celibacy anthem "God Wants Us To Wait" has a doomy Human League vibe and a deliberate poke at those who are savin' it up for the Lord even when wanting to touch "the dew on (her) hem." "Andrew In Drag" is a timeless Magnetic Fields saga about a straight guy who wants his drag queen buddy either to be an actual gal or for the narrator himself to turn gay and have Andrew (in drag). Its simple, sweeping chorus of the title is sung perfectly.

The album's funniest song, "Your Girlfriend's Face," is about hiring a hit man to really mess up an object of affection's current mate, and its fiendish details about "blowing off her face" and "being buried alive in crystal meth" is delightfully shocking. Definitely a TMF classic, and though it won't inspire any snuggling, I may never stop giggling at it when it comes up in the sequence.

The album fumbles a bit through its middle section — maybe these songs will grow more on me over time — but the final trio of cuts are awesome as the first three : "I Don't Like Your Tone" is as good as any almost love-hate battle Merritt created back before leaving Merge; "Quick!', possibly the best song here, is built on a gorgeous Phil Spector or Joe Meek sense of melodrama and melodic lilt through its urgent, imploring vocal; and "All She Cares About Is Mariachi" may be an actual, straight-out novelty song, but it deeply entertains as one.

Deeply entertaining? I'm thinking Stephin might insist that's all the praise he needs.