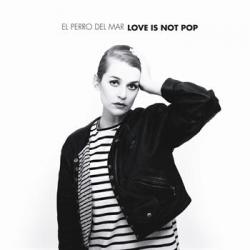 Love Is Not Pop

Gothernburg, Sweden’s sweet-voiced Sarah Assbring has teamed up with Rasmus Hagg of the duo Studio this time out, for the third album from El Perro del Mar, Love Is Not Pop.

“Album” might be pushing it, if you’re looking for length, as this is seven new songs plus three remixes. Following up 2008’s From The Valley To The Stars, which had oodles of small little ditties about desire and deities, “L is for Love” is just as romantic and lyrically ambitious, but deeper and more concerned with human amore. Besides a splendid if sobering adaptation of author-theologian G.K. Chesterton poem “It Is Something (To Have Wept)” Assbring (and Hagg) have crafted a stainless examination about what makes our bodies warm, and what turns our hearts cold.

“Gotta Get Smart” is classic, wounded-sounding El Perro del Mar, kicking off the cycle with one of its strongest choruses. However, the self-hatred of tracks from the first record is long gone, as Assbring isn’t going to take it anymore (compare with “Dog” from the self-titled debut) and specifically describes why in the song. After the full-on spiritual vulnerability of the second album, Assbring sounds empowered and thoughtful throughout Love Is Not Pop, and more confident than ever (“Let Me In,” “A Better Love”). “Change of Heart” is quietly, classically tough, with a timeless continental pop edge never heard before in El Perro del Mar’s oeuvre.

My favorite track would have to be the cover of Lou Reed’s “Heavenly Arms,” though, because Assbring flips the gender assumption, even with the glaring, obstinate line “Only a woman can love a man,” destroying its meaning by singing it before she croons the repeated one-word chorus, “Sylvia”. I can only imagine what her intentions were in doing this, but I don’t think it was a conscious attempt at subversion. In any case, it transforms Reed’s optimistic finale from the darkly legendary “Blue Mask” 1980 come-back into something even more joyful and affirmative. People who know the track will probably scratch their heads wondering why she included it, until they hear its beauty and placement in the order of songs here.

Love Is Not Pop is brief, and takes a few listens to get past its pristine construction, but the intelligence of the lyrics and the way the topic of love is handled reminds me of a great R&B concept album from the 70s. Back then we couldn’t have imagined what “Swedish soul” might have sounded like, but artists like Sarah Assbring have successfully merged the Abba with the strong-female elegance of the most creative Motown singles, and Love Is Not Pop adds a new angle to El Perro del Mar’s uplifting message.