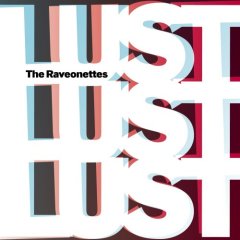 It’s about time the Raveonettes released an album called Lust Lust Lust. It’s the common theme running through all of their albums. It’s certainly been implied in the titles of all of their releases to date: Whip It On, Chain Gang of Love, Pretty in Black, and overt in the content. They’ve never hidden their Red Light District impulses, but with Lust Lust Lust, it’s laid out perfectly on the table.

I’ve been wrestling with this album for about two months, trying to grasp whether this is genuinely one of my favorite bands’ best album to date, as my instincts say, or if that's the hyperbole that we music critics like to throw around without shame. I have reached the conclusion that it, in fact, is the band’s best work to date. It explores a common theme (lust, of course) in each song on the album, and not always longingly. The previous albums all had great moments, but some amount of filler between some pretty great singles (“Love in a Trashcan” from Pretty in Black is my favorite of their songs).

I’ve admired the band since their 2002 EP Whip It On and have followed their career thusly. Each album has been a step forward while maintaining their instantly-identifiable sound. With Lust Lust Lust they are not wading in unchartered waters by any means, but they’ve long abandoned the self-imposed limits (Whip It On was recorded in b-flat-minor and used just three chords and no song ran longer than three minutes). Still present are the obvious love of 50s and 60s pop and the Velvet Underground/Jesus and Mary Chain use of feedback as an instrument.

The first song on the album, “Aly, Walk With Me,” has Sharin Foo and Sune Rose Wagner singing softly in unison over a simple, sparse drum beat and some loud, reverb-heavy guitar lines until midway through the song when it starts drowning in fuzz and distortion. You can still hear the same, steady drum beat, but the distortion turns into noise. It’s a tactic that works brilliantly, throwing off the continuity of the song and reminding the listener of the seediness that the Raveonettes’ music inhabits.

“Dead Sound” is the first single and is another standout track. It has a driving, fast guitar part that slows down once the vocals kick in. Foo’s harmonies control the tempo of the song. When she slows down, so does the rest of the song. It’s not quite the catchy single that “Love in a Trashcan” was but it’s a strong track on a more consistent album.

Always being indebted to the pop sound from their parent’s generation, the Raveonettes reworked the song “I Want Candy” to now become “You Want the Candy” (which they performed live last year at the Triple Door, and I either mistakenly, or accurately at the time, called it “Who Wants the Candy?”). The lyrics automatically become double entendres but it is still executed beautifully.

The Raveonettes have always been a derivative band, but they’ve always paid tribute to their heroes by making their influence overtly not hidden, while also finding their own sound. They’re also the most stylish band I can think of.

I’ve never been disappointed by a Raveonettes album, but with Lust Lust Lust they are getting closer to crafting the masterpiece they are capable of.