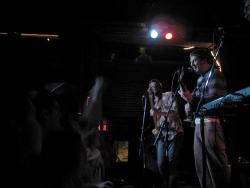 These days, with the economy still teetering on the edge of collapse, it takes a genuinely incredible line-up to get me to drive all the way down to Portland for a show. It’s not just gas prices, it’s the cost of a hotel, and a meal, a trip to Voodoo Doughnuts to see what a bacon-maple bar is – and a very well spent $10 cover.

The show last Saturday was a celebration of Magic Marker Record’s 10th anniversary, and it showcased the label’s finest pop bands, both past and present: The Galactic Heroes, Dear Nora (both reformed for this night only), BOAT and Tullycraft.  With a line-up like that, Portland really doesn’t seem too far away.

The night started off with the Galactic Heroes, who have been split up by geography for years. Though they were not ones to do stage banter (as they themselves admitted), their bright hooks and well-worked harmonies more than made up for it. Their set included exemplary pop melodies, such as “Back in Love”, a personal favorite of mine. The poor band had to put up with a group of overly boisterous (and intoxicated) men, each of whom was probably twice the size of a Galactic Hero. Still, despite the occasional interruption, it was obvious that the loss of the Galactic Heroes was a great loss to the Northwest pop scene. I bought their album, “Every Sidewalk” as soon as I got home, and I highly recommend it.

As BOAT began to set up, the raucous Galactic Heroes fans became even more so. With shouts of “WHO THE FUCK IS BOAT?” and periodic football-fan-esque chants of “BOAT! BOAT! BOAT!”, the large men managed to be both annoying and contradictory.  BOAT took it well, even offering hi-fives to the eager group. BOAT’s performance was incredibly fun as usual, and their set was full of never-before-heard songs, including a tribute song to Tullycraft (and at one time, BOAT) drummer, Jeff Fell, and covers of two fellow Magic Marker signees, Dear Nora and The Faintest Ideas.

For the final song, D. Crane (BOAT’s singer/guitarist) invited people to come on stage with them. “But you can’t touch us!” he told the drunken man-fans (who he called the ‘Alpha…Beta Phi frat house’). Though surprisingly they didn’t storm the stage, a few other (quieter) fans did and danced around with BOAT to “Lately I’ve Been on my Back.”

For some reason, the loud men did not stick around to see Tullycraft, which may have been a blessing, but is perplexing because Tullycraft dealt out even more fantastic pop songs. Tullycraft is one of the more adorable bands in Seattle; Guitarist Chris Munford and bassist/lead singer Sean Tollefson were both wearing sweater-vests, and the always lovely singer Jenny Mears was wearing one of her trademark vintage dresses. Beyond looks, their songs are each just as adorable as the band. Their vocals complement each other perfectly and the lyrics tell elaborate stories with catchy choruses; I fell in love with one in particular that night called “Superboy Supergirl.”

The audience was in love with this twee-pop band, and all the dancing made me wonder if Seattle’s stoic reputation was actually true by comparison. More likely, I think, is that Tullycraft put on a great show that made dancing pretty much inevitable.

Unfortunately I missed Dear Nora, but I did get to see the modest speeches made by Magic Marker founders Curt Kentner and Mark Rothkopf. I owe these two men a huge debt of gratitude for allowing some of my absolute favorite bands to release their albums, and for this amazing show which had probably the best line-up I could ever hope for. Congratulations Magic Marker!