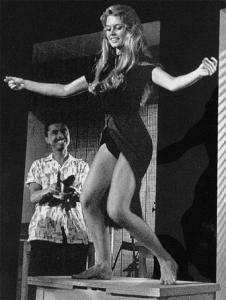 Ah, here we are on the precipice of the holiday season (well, I suppose, for most marketers in the US, we’ve been in the Holiday Season (TM) since Labor Day). Time to get real busy, travel every direction all at once, have to sit next to unpleasant people on small, metal tubes that are hurled through the air and generally be in a state of panic most of the time. OK, maybe that’s not the Nondenominational December Holiday Spirit (TM), but hey, I think I’m a little closer than cookies dancing in a circle while Kwanzaabot spins a dradel on a manger. Not sure what this has to do with the spin for today other than acting as a warning that the Holiday are here and no December, no one can here you scream.

I think we can all agree that the respective Mambos No. 8 and #5 have as much in common as Australopithecus garhi and Homosapien sapien, i.e., not too much. Sure, they both have the word “mambo” in the title, but beyond that, the evolutionary trees branch in quite the different directions.

With that, I bid you a happy holiday weekend.