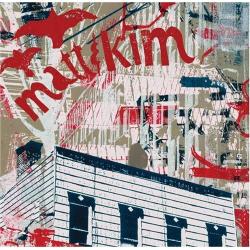 Ecologically speaking, a "niche" refers to a "relational position of a species or population in an ecosystem." In a way, you can look at all of indie rock as one big, rockin' ecosystem, where some species thrive (e.g., Modest Mouse, the Shins, Built to Spill) and some falter (e.g., any number of bands you'll never hear from again.) Certainly, when one important musical niche is vacated by a surprise extinction of a species/band, it should be a given that another species/band will come along to exploit that niche. While many niches may be quite large and allow for many species to occupy it, such as "sad bastard music", other niches are relatively specialized. One such specialized niche might be "keyboard-dominated post-punk indie rock". Until recently, this niche was filled with bands like the Anniversary, the Capricorns, the Rentals and, depending on your definition of the indie rock ecosystem, Weezer. Now, alas, all these species/bands are no more (although there have been rumored Capricorns sightings), but Matt & Kim have climbed up the ecological ladder to fill this niche and their debut shows they have the chops to not end up an evolutionary dead-end (although they still have some learning to do.)

On Matt & Kim, if you like the first 30 seconds of the opener, "It's a Fact," then you know you'll like the whole disc, because the duo pretty much don't change the formula of frantic drums and thick synths from there on in. The Brooklyn duo (surprisingly named Matt and Kim) know a good thing when they play it and "It's a Fact" blazes by like a new-wave White Stripes song – just imagine Jack White with a keyboard instead of a guitar. Songs like "5K" and "Yea Yeah" takes a page from the Anniversary's under-appreciated Designing a Nervous Breakdown with a slight feel of melancholy over the crashing drums and keyboards. Matt vocal style is very reminiscent to the Anniversary's Josh Berwanger and Justin Roelofs, adding to the similarity. In a more Weezer type turn, "Right? OK." sounds like what you might have expected if Matt Sharp stayed with Rivers and the gang after Pinkerton.

One of the best turns on the disc is "Grand," where they mix up the tempo and explore a darker sound, almost like a possessed version of the Capricorns. "Someday" is cut from the same branch – Matt's keyboard like is positively nerd-tastic while keeping the darker tone that does the band well as Matt bemoans getting older: "I might grow old someday/but I won't turn pale and grey." Matt & Kim break out of their pattern on “Lightspeed” when Kim's drums are replaced with handclaps and Matt's keyboards take on an almost carnival-like sound – all of it working surprisingly well (and who'd think they'd have a song about baseball?)

A few exceptions to the frenetic pace of Matt & Kim include "Dash After Dash" that sounds like as if Mates of State got some teeth, but just isn't as captivating as the faster paced tracks. The real Achilles' Heel of Matt & Kim might be the lack of variety in many of the songs. When you listen to the album start-to-finish, you begin to wonder if you're just hearing the same song over and over, they're just that formulaic. Not that this is necessary a terrible thing, but you wonder if Matt & Kim are a one-trick pony when you're wondering when "No More Long Years" ended and "5K" began. Hopefully, this is just a product of debut album jitters and in the future, they'll expand on their sound (just look at the Anniversary's Your Majesty.)

Matt & Kim will find plenty of followers as they begin to exploit the resources found in their piece of the indie rock ecosystem. I suppose that finding fans when you play synth-heavy, nerd-centric indie rock is like shooting fish in a barrel, but Matt & Kim shows a good grasp on the sub-genre – albeit a grasp that might be a little monosonic. Really, though, if you know what your niche is, a little overspecialization doesn't hurt, you just have to pray that the climate doesn't change too quick or you'll find your going the way of the mammoth.