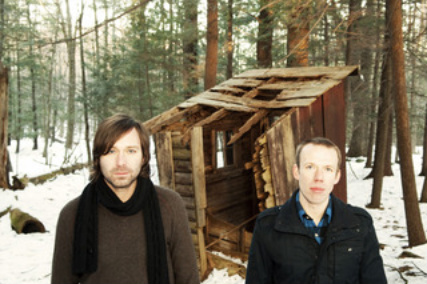 I’ve been in crush with Matt Pond (usually of Matt Pond PA) since the mid 2000’s, when a track called “Kc” came out on their album Emblems around ’04 or so. Really, any angsty musician singing “There’s no way to the heart / better than awkwardly” in the opening lines of a haunted-chord laden ditty would have won me over, but Matt’s earnest tones coupled with that verbage — plus a cello accompaniment — mixed up the run-of-the-mill sad alt.indie sound of the time very much to my liking, and it stuck. It’s a mixtape staple if there ever was one from that timeframe to be had.

Cut to now, and we’ve got said heartstring-yanker taking to the road on the heels of his latest release, The Dark Leaves, with none other than our local love-slash-Barsuk member Rocky Votolato. They’re taking to the road for a winter tour, with Matt accompanied by Chris Hansen and cellist Shawn Alpay. Sadly, there’s no Seattle date on the tour, but if you can push your friends and loved ones out there to pop into a show that hits their city (Connecticut, I am looking at you!), please do. Given the intimate nature of these venues, it’s a lineup well worth your time and money.