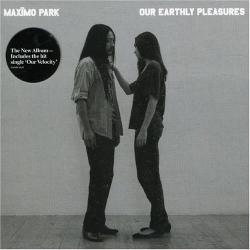 Maxïmo Park is the forgotten son of the Brit-rock scene of the ‘00s. Bloc Party, Franz Ferdinand, Muse, Arctic Monkeys; these are the bands that get the headlines on NME and Radio1, but Maxïmo Park just keeps on putting out excellent records while everyone is looking the other way. If you were to draft a fantasy Brit-rock team, Maxïmo Park would be a solid sleeper pick, a band that not everyone is clamoring for, but will put up solid numbers every time.

Our Earthly Pleasures is not the best album of the year, but it just produces, delivering song after song of energetic, catchy rock and roll. The key to Maxïmo Park is the dynamic mix of Paul Smith’s vocals and the richly textured musical arrangements that back him up – it was this mix that made 2005’s A Certain Trigger one of the most exciting surprises of that year. The band decided to take it up a notch on Our Earthly Pleasures, bringing in famed producer Gil Norton who has worked with luminaries such as the Pixies, the Catherine Wheel and Dashboard Confessional and he adds a lot more sophistication and depth to many of Maxïmo Park’s compositions – sometimes to a fault. However, most of the times you end up with solid pop-rock songs like “Girls Who Play Guitar,” a prototypical Maxïmo Park song where the clashing guitars are backed up a solid rhythm while Paul Smith’s vocal keep the song moving forward – he’s sort of like Kele Okereke (Bloc Party) but with the sense of writing reasonable lyrics. “Books from Boxes,” is one of the strongest songs, pulling back the throttle and building the tension piece by piece into a melancholy gem about someone leaving. It might be one of the most polished songs that Maxïmo Park has produced.

It's fun to hear Maxïmo Park just letting loose, like on “The Unshockable,” a Blur-like song that is as aggressive as the band gets and you can tell Gil really wanted the band to take more of a Pixies like turn on the track (and it more or less works). Another gem on the disc is the hand-clapped “By the Monument,” a song that mixes Maxïmo Park’s signature guitars with piano (which doesn’t always work as I’ll detail later), the song is a bittersweet love song of two people parting ways (”I’m just passing my time/with you on my mind”) it is a microcosm of why Maxïmo Park works so well so much of the time. The album closes with the pleasant but plaintive “Parisian Skies,” (”I don’t think she knew how much I really loved her”) and that really seems to be the mood across Our Earthly Pleasures to create a solid set of melancholy love songs. You can hear Gil’s production – or sometimes overproduction – on tracks like “Our Velocity” and “A Fornight’s Tale” where the keyboards get a little carried away, creating an almost Who-like sound to the tracks, only when the guitars take over do the songs become compelling. “Russian Literature” also suffers from the “rock opera” syndrome also, just listen to the frantic piano that drives the song, it feels horribly out of place in a Maxïmo Park song, like Ben Folds lost his way and stumbled into the band’s recording studio. Whether it’s a good thing or not, “Karaoke Plays” is the most radio-friendly song that the band has ever recorded and songs like it could be a hit in the making (if Clear Channel would ever approve of bands like Maxïmo Park instead of dredges like Plain White Tee.)

Our Earthly Pleasures has its ups and downs, just like you might expect from a band recording only its second true full-length, but the album is a solid sophomore effort that reinforces what we already know about the band and expands it into new territory. While their Brit-rock brethren might be getting most of the press, maybe its Maxïmo Park that will have the lasting career when all is said and done, just churning out albums that are both compelling and infectious while the rest just make a lot on noise on the pages of magazine – and really, where does the sound really count?