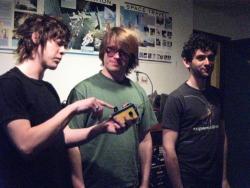 I don’t ever remember it being as hot in Chop Suey as it was Monday night.

That’s not a metaphor. Even with it being somewhere not too far above 30 degrees outside (yes, in mid-to-late April), the club felt like a sauna. Not only was it hot in Chop Suey, but it was packed.

MGMT, a hot-shit band from Brooklyn, stopped by the Capitol Hill club in the middle of a pretty exhaustive tour across the planet to promote their excellent debut LP Oracular Spectacular. This was the second time the band has been in Seattle since February ,and they're in the middle of a tour that will take them to Europe next month – and that includes a stop in Indio, CA this weekend for the Coachella Festival.

When MGMT played at Chop Suey, it could have been a set they played anywhere. There was no banter between songs, even a “this is the first song on our new record.” At the end of the night, when a member of the band (it was too crowded to tell which) said thanks and they’d be back in the summer, I wasn’t sure if it was because they were referencing their show in June at Marymoor Park with Nada Surf and Flogging Molly or if a return appearance was just inevitable.

That is not to say I didn’t enjoy MGMT; in fact, very far from it. Their set was pretty terrific. They played to a packed room and fed off of that energy. Playing more of the slower songs from Oracular Spectacular first, their set got progressively more upbeat and, hence, exciting. By the time they played “Kids” at the end of the night, everyone in the room was jumping up and down.

MGMT finished up around 11:30 and played for about 75 minutes, making their way through all of Oracular (and throwing in a cover of the Kinks’ “Mindless Child of Motherhood”) plus a couple of other songs that I didn’t recognize. As much as I enjoyed the album (and I thoroughly did), I think this is a band is best experienced live.

On the version of “Time to Pretend” (the band’s most recognizable single) that appears on Oracular, the synth sound is quite present and obvious, but live that was toned down and it was a more straight-forward rock song. It still got everyone in the crowd dancing, though. Plus, there was only a minor exodus after they played that song.

One of the things I like about MGMT is that they, I assume, listened to the same classic rock growing up that I did. Not just by covering the Kinks, but also in their original songs you hear elements of Pink Floyd, the Rolling Stones, Led Zeppelin (one song whose name I missed sounded exactly like “Stairway to Heaven” – but in a good way), and Sgt. Pepper-era Beatles, and throw in some African rhythms as well and thematically they echo the mysticism of hippies. Yet, MGMT is still not a classic rock band the way that Jet wants to be AC/DC (ha!) or Vampire Weekend wants to be Graceland-era Paul Simon and they wouldn’t fit in at Woodstock because they get too much of their (recorded) sound from synths.

Although MGMT played one song after another without any interruptions and were tight and well-polished (just as you would expect when listening to them or anyone else on a record), I still think of MGMT as a better live band than they are recorded. You can’t capture the energy of Chop Suey while people danced (or tried to) to “Kids” and “Time to Pretend” on an album. As a bonus, MGMT also didn’t confuse Seattle with another city, a la Kanye West last week.

All things being what they are, MGMT was a great show and with all of the distractions I mentioned above (did I say that with the Raconteurs playing at Neumo’s that same Monday night that it was much harder than normal to find parking?), there was still no other way I would have rather spent my Monday night.