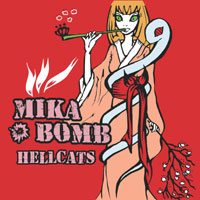 Mika Bomb's brand of slap-you-upside-the-head, super-sexy-razor-happy garage rock has been described as 'Motown punk' — a blend of Motown and 70s style NY punk. Of course, with the three front-girls of Mel Roxy and Anko on guitar and band co-founder Mika Handa on vocals all hailing from Japan, there is a good helping of Japanese pop thrown into the mix.

But don't let that description throw you — listening to Hellcats, it's clear that Mika Bomb's main influence is the Ramones' brand of 'one two three, let's go…' punk rock, with its 14 tracks clocking in at barely 34 minutes and with only two of them running over three minutes (one of them being the lone cover on the album to boot).

Mika Handa first moved to London in 1998 with her dream of starting a Japanese girl punk band, and quickly got the attention of the hugely influential US label Grand Royal to record their first album, The Fake Fake Sound Of Mika Bomb. Unfortunately for them, Grand Royal folded before it could be released, but the record was picked up by the UK punk label Damaged Goods for a UK release in 2001, and to some acclaim (BBC radio DJ Steve Lamacq called them "the best band to ever come out of Japan"). With Hellcats, we now get to hear Mika Bomb's eagerly awaited return. We find them both in fine form and with a more mature and varied sound.

Hellcats opens firmly with "Shut ya mouth," a solid little rock number which sets out Mika Handa's lyrical tone of a 'gives no bullshit, takes no bullshit' (diminutive) punk rock chick for the rest of album with the opening line of "I hate the girl you want me to be baby". From there Hellcats swings from one quick-paced, two minute special to the next, with the catchy tunes, bubblegum-esque all girl backing vocals, and infectious Japanese accents making for one fun, toe-tapping and head shaking ride.

Many of the tracks are very much in the Ramones' vein, including "Bettie Page", "Hellcat Riders", "9-5ers", "Rock Out", "Hero No. 1" and a great and faster rendition of 2001's too-good-to-remain-a-B-side "Boomeranka". Other standout tracks include the addictive "Have a bad day", that gives Mel and Anko the most exposure on guitar, and the seductive "Yellow Fever" that similarly allows Wataru Idol to thump his bass around. Then there's the slower and groovier "Chuck Berry" that most displays their Motown influences, and which even features an electric piano.

But if there's one track that sums up Mika Bomb and Hellcats, it's "Osaka" — with Mika's killer tip of the hat to the Ramones chorus, "I'm a yellow bitch from Osaka city, sitting on my ass on Rockaway Beach.". How cool is that?

Finally, Hellcats closes with somewhat of an anomaly in "Won't go out", a Holly Golightly cover (who's probably best known for doing a guest vocal on a White Stripes song). Holly's country-influenced music and twangy vocals (she guests there too) seems out of place other than as a label plug, being on Damaged Goods also. Though after several listens and since Mika Bomb don't really have the close-out slower song in their repertoire yet, this track seems strangely fitting.

Oh, and one last thing — for any lucky imaginary friends in the Eastern US time zone — I hear Mika Bomb put on an energetic live show and have a short US tour planned there for early June…