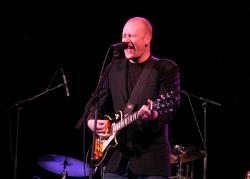 Mike Doughty is a showman. He stood up on stage at the Somerville Theatre with his "guitar teacher that made it big" look about him and he made us question the content of concerts as a whole (more on that later).

Doughty, doing his best Phil Collins/Michael Kors impression in his choice of dress (black t-shirt, black suit jacket), introduced the opening band himself holding a bottle of Poland Spring, completely casual, like he was just some guy. At first, I just thought he was a roadie doing a sound check.

The Panderers were comprised of 2/3s of Mike Doughty's band and claimed they were from a town in Indiana with no stop lights. They played indie frat rock with a country-fried flair. Their lead singer and Doughty looked so similar that you thought they could be the same person (they weren't … I saw the lead singer of the Panderers at the merchandise table while I went to find the bathroom. I thought that would be a crazy concept though, the lead singer of the band pretending to be someone else so he could sing with the opening band).

Mike Doughty took the stage before a typical Somerville theatre audience — lesbian couples, drunken college kids from Tufts, and aging hipsters. The energy of the theatre was strained due to the fact that it is a seated venue. Doughty addressed this — when someone in the crowd asked if everyone could stand, Doughty said he didn’t care what anyone did … why stand though, when you can sit? So there were a few stragglers in the back dancing their little hearts out to Doughty's bravado and catchy lyrics next to the soundboard.

Doughty also did not shy away from the past as some musicians do. He sang “Soft Serve” from his old Soul Coughing days to my great delight. “Soft Serve” was quite possibly my favorite song of my early high school career … and to make it more ’90s, I had gotten that song free with my pair of brown Doc Martens.

But anyway, Doughty was a showman. He cracked jokes that didn't seem they’d already been cracked with any other city (he knew the nearby town of Braintree for instance, and his drummer had dropped out of Berklee School of Music). At times he was more comedian than musician.

The band ended with an encore that wasn't an encore really — they just turned their backs to the audience for 30 seconds before the lights screamed back on for a playing of Doughty's hit "27 Jennifers." It was a move that mocked the traditional, cliché concert formula of pretending to be done while everyone yells for the band to come back on and inevitably they do (except Mates of State, who I once saw keep the house lights down for five minutes and never come back, which I thought up to now was a dick move but now I see it more as genius). It made me realize that the format of the concert itself is completely ridiculous. Why do we cheer loudly for the band to come on when we know that they will? Our cheering will not convince them otherwise. Why do people have encores anyway? Maybe so the guitarist can go to the bathroom…

Doughty finished the set and thanked the crowd as he walked off stage. I felt like he meant it.