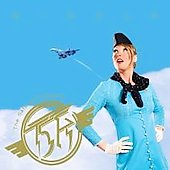 This review is giving me nothing but fits.

There is very little about the Saturday Knights for reviewers to grasp on to. You just have to sit back, listen to the music, and groove to it. That’s the easy part. Explaining it is where the trouble starts.

See, there is no real definitive “Saturday Knights sound.” There are 13 songs on the album – and the worst you can say about any one of them is that it is merely “very good” – and not one sounds like the one that precedes or follows it. It is the most consistently solid but inconsistently sounding record I’ve heard in a while. On “I Go”, they employ a Van Halen-like guitar intro (from Soundgarden’s Kim Thayil) and follow it with “The Gospel”, a Southern Rock/country ditty that bears little to (but not to none of) the hip hop sound that runs through quite a bit of Mingle.

The album kicks off with their first single “45” – it’s got a big chorus (“I was on the dance floor and I heard the DJ drop my 45 and I was so hot that I dropped my .45 and everyone just ran, ran, ran”) rhymed over a turntable scratch from DJ Suspence. During the final chorus, they change “ran” to “danced” and that gets it right. It could be a big dance hit with the floor packed with people moving to the song and singing along to the chorus. The rhymes on this track specifically (and on this album in general) are so tight and flow so smoothly that you can’t dismiss these guys as a joke band. They are fun and funny but Tilson, Barlfy and Suspence know how to make a hit song as well as anyone.

“Dog Park” is the laidback summer anthem. The rhymes and the tempo are slowed down considerably but it is followed by “Foreign Affair” – TSK’s ode to four international hotties that increase their blood pressure and, subsequently, the energy of the album. The love they show in this song is for Amy Winehouse, Lily Allen, Nicole Willis and MIA and their rhymes drop song titles and lyrics from those four ladies’ songs (“Amy, Amy, Amy, help yourself to some f-me pumps in my bed…”). The verses come across to fast to keep up so you (or is it just me?) only can keep track of one or two words in a sentence to hear who they’re referring to (“Soul investigator”, “Tears dry on their own,” “Are you a window shopper?” etc…).

They are equally libidinous on “Private School Girl,” another catchy pop killer with a catchy, call-and-response, boy/girl chorus. On a record that has appearances from the Dap Kings (no shit!), Chris Ballew from the Presidents dropping a bassline, and legendary producer Jack Endino playing drums, the use of Holly Deye (the bassist from Lillydale, a one-time Northwest pop/rock band that I really miss) on vocals might be the most inspired guest musician on the record. She captures the personality of a party girl who finds TSK’s overtly sexual “charm” completely irresistible while only trying to give an illusion to any innocence.

“Ass Kicker’s Haircut” is a funny title for a song – and has lyrics to match. Name-checking on-screen tough guys like Steven Segal, Patrick Swayze and Sylvester Stallone, they celebrate and mock the Dirty Harrys on film. An electric guitar and drums provides the beat and the rhymes include lines like “…arguing over who the dude with the biggest belly is, I can tell you this, this fucking pool hall smells like pomade and piss”. The song is an absolute riot.

Each song on Mingle is unique – but none can be truly considered serious. They are often hilarious and fun, but still well-constructed and expertly produced. Like Outkast, TSK has the feel and spirit of a rock band even if their sound is commonly labeled as rap or hip hop. TSK does prove here is that being pigeonholed or labeled is bullshit. The first time I saw TSK play live they opened for Harvey Danger and just last week they shared a stage with Wu Tang Clan’s RZA. On Mingle they prove that they don’t care who is at the party, only that they are at a party and they are going to have a damn good time while they are there. Everyone else will too.