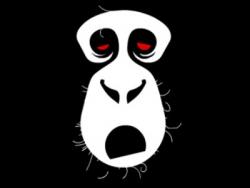 Happy Birthday!, Modeselektor's breakout album, is a full onslaught of dance party. It has been my accompaniment on dog walks, runs, cleaning parties (with me in my underwear) and even a couple of manic "altered" nights brimming with endless fun. Apparat's work with Ellen Allien (Orchestra of Bubbles) became more of a melancholic backdrop to the whir of my work day while their '07 release Walls was electo-infused pop in an IDM world, lofty in it's batter of ever-expanding sounds. I love both of them, so using simple math, Moderat > or = Modeselektor + Apparat… right?

Nordic Soul parlayed into Truckasaurus then went back on for a DJ set before Moderat took the stage. Nordic Soul, Sean Horton of Decibel Festival fame, rocked the in-between times house party style, lathering the crowd up for both trios. The crowd responded well to Nordic Soul and was overwhelmingly excited to see Truckasaurus romp to the front of the stage, microphones in hand and blaring.

I'd heard a lot about Truckasaurus over the past few years living here, but never bothered to really check them out, being tuned off by descriptions of them as being gritty 8-bit'ers and a lo-fi electronic hulkamania trio. Maybe it was the listening party aesthetic (and literal listening party for a new album) of their performance or the fact that they weren't on stage at all the entire time, but I was underwhelmed. The highlight of their set was a squeaky 8-bit version of the Air Wolf theme and the bass heavy tracks that induced a few down and dirty dance moments amongst the crowd.

The visuals during Moderat's set was stunning, X-rays and hands fold over and over, ambient landscapes and odd shapes morphing into each other. Spanning the three screens behind Neumo's stage, the visuals show definitely added a lot to the experience.

Moderat's sound seemed to vary a bit from what I've heard on their record… more dub influenced IDM with a Boards of Canada beat-tweak. Contrary to the opening acts, Moderat produced a subtly danceable sonic experience, an understated reverberation of sound. Wisely, they started slow and gradually revved up the tempo and intensity track by track, which is the way a real party gets started.

Moderat succeeded in being enjoyable and butt-shake worthy. Neumo's was packed with every stinky hippie/hoodied hip hop electro-head/Mom that used to rave back in the day in a five mile radius. The environment was positive, the crowd was sweaty and Moderat steadily ascended musically throughout the entire show.

As I walked out of the show a bit early (I have a real job and can't stay up til 2:30 am on a Tuesday) I couldn't help but wish I had just seen Modeselektor, or even Apparat, instead of their siamese twin. They just felt like a logical progression that melded their styles together rather than a body ravishing super-mutt version of themselves. Sometimes stark, often unfussy and detached, Moderat rocked the bodies last night… but were careful not to rock too hard.