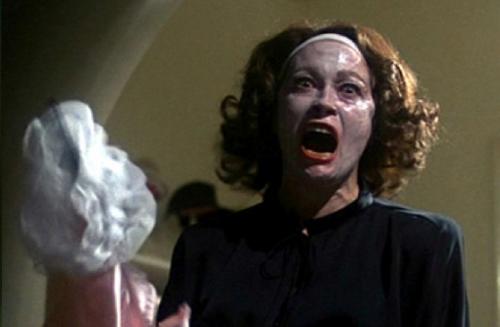 Another movie I probably saw WAY too much of – 1981’s Mommie Dearest, is the definition of a serious drama gone wrong, as in “total cheese” and “full of over-the-top actors” wrong, but also as in “so bad it’s good” wrong. Faye Dunaway takes the infamous Joan Crawford to all new levels of raised eyebrow expressions while she pouts, sobs, and screams at adopted daughter Christina for everything from not eating her whole steak to the oft-quoted “No! More!!! WIRE! HANNNNGGGERSS!” scene.

Since I find myself quoting it on a weekly basis, it only seems natural that I should be excited about the Mommie Dearest Quote Along this weekend at SIFF Cinema – especially because SIFF is giving everyone their own wire hangers just for the screening. There’ll also be subtitles on screen for key lines, and a pre-show Joan Crawford drama queen costume contest with prizes.

Put on your best Crawford-esque dress, draw on some eyebrows, and head to SIFF Cinema Saturday, 2/26. Showtime’s at 7:30pm, and tix are $12 each/$7 for SIFF Members. (You can buy tickets online here)