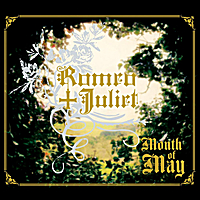 One-half of this new musically-inclined duo has been a friend of mine for years: Celene Ramadan, AKA Leeni – so just to be clear, this isn’t lip service or me trying to pump up a pal’s music, as I’ve been a genuine fan or her pretty tunes since the moment she started creating. I’ve got all her stuff in my library, and am particularly fond of her 8-Bit work, so naturally when I saw she had a new band happening, I was intrigued.

The other half, Jon-Michael Kerestes, I was wholly unfamiliar with. This Pittsburgh, PA musician apparently reached out to the internets (via Craigslist) to find collaborators around the US, and lo & behold, Leeni answered his call. The result is Romeo + Juliet, a trippy psychedelic alt-rock band that could be direct from a Quentin Tarantino soundtrack.

Their debut, Month of May, is packed full of music with a gritty, full-on 60s sound. Leeni & Jon-Michael sometimes switch lead vocals, and other times go for it with a full duet,  always incorporating beautiful harmonies at just the right moment.

The opening track, “Get in Your Square” turns up the funk with some deep beats and stompy good-time riffs, leading right into the duet “Another November” – possibly the most Doors-esque song on the album, featuring lots of keys. And in fact, Jon-Michael’s voice isn’t that far off from Morrison’s, so it wouldn’t be impossible to imagine the shaggy-haired rock God belting this one out.

“The Acrobat”, features Leeni’s pretty signature vocals, followed by the dark “True Love”, while the next song, “Goozy”, takes it up a notch with some over-the-top lyrics hauntingly sung by Jon-Michael, “She is good and junk and goozy | all the time | I will buy her favorite beer | I’ll spend the night in jail.”
And “Red and Black” seems like it was made to go over the credits of a James Bond movie – as the chorus goes, “Will you kill me dead? | Or kiss me instead? |Take me out or take me back | Make it red, make it black”

All in all, the album brings to mind running through grassy fields in flowing dresses, sunflowers tucked behind ears, and long hair blowing in the breeze – but it’s not all sunny. Dark missives are peppered throughout, like the solemn attitude of “Live in the Light” (which has a decidedly “Personal Jesus”-like riff), and even though “Pretty Girl” sounds like it should be full of goodness, it’s really very very very sad.

My favorite tune, “Moon Was Full and Bright” is injected with a touch of witchcraft – bringing to mind dark woods, broken-down cemeteries and secret rituals….and yet, I think this is a….love song? “Man or Woman” changes gears a bit with some down-home-bluesy-country sound, bringing to mind dusty bars, floors sticky with booze, and a jam band with a soulful singer to entertain the clapping patrons.

And then there’s the giddy “Wondergirl”, which somehow sounds like the theme song to a Sid and Marty Krofft show – if that show were slightly depressing and a little morose. “Skeleton Bride” makes me think of an island shrouded in mystery and ancient customs, simliar to the one in The Wicker Man (I know, I know, I can’t help it guys).

This isn’t exactly music to dance your ass off to; it’s more like music to sway to slowly, or something you put on the stereo (remember that term, kids?) when you have friends over – talking, drinking, and enjoying some good conversatoin. And most of the time the lyrics don’t make much sense, but honestly? You won’t care.

You definitely have to be in the right (open) mind for Month of May, but the driving beats and glorious harmonies are guaranteed to catch you – and then you’re just gone, man, gone.