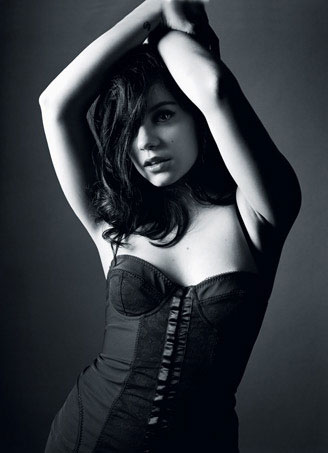 Ok, I didn't mean for it to happen, but the Imaginary Blog has turned into the vehicle for my superfan-like love of Lily Allen. Just this week I blogged about her good taste in music and her excellent Bush protest song. I wouldn't have thought about another post on her, but I woke up (without an alarm clock since I took a personal day from my day job) with an e-mail with lots of details about her forthcoming record.

It was originally going to be called Stuck on the Naughty Step but now the title is It's Not Me, It's You. It is scheduled to be released on February 10 on Capitol Records. I'll include the tracklist below.

While she's been releasing different songs through her MySpace page for the past year or so, "Who'd've Known" is the only one to make the final cut. I've been hooked on two songs not on final tracklist ("I Don't Know" and "Guess Who Batman?") but if those weren't good enough for the final record, this will be my most-anticipated record of 2009 so far (although I cannot wait for Annie's Don't Stop either, which, and including, hopefully a President Obama, makes for an already-promising start to 2009).

Below is the tracklist and "Who'd've Known":