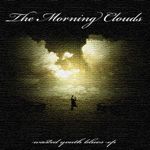 The Morning Clouds is sole product of Josh Wambeke, a Denver resident who has been involved in numerous projects, but is perhaps best known for his work with a band called Fell, who was apparently lauded by none other than Thurston Moore. As if that is not impressive enough, Wambeke has recently recorded and released Wasted Youth Blues, an EP written and recorded alone. I am not sure if this was all recorded at home, but if so, one wouldn’t notice as the clarity of the mix and production quality are beyond professional in breadth and sound.

“A Walk Home” begins with a simple three note guitar riff, not too dissimilar from a PJ Harvey track. Then keyboards, percussion and additional guitars combine layer upon layer of hazy, soporific bliss. Wambeke’s soft, nondescript vocals are not dull or grating. Rather, they create another gentle augmentation to the overall sound. “The Wrong Things” is a cross between 1960s pop and Darklands era Jesus and Mary Chain. The reverb heavy lead guitar certainly recalls a sound close to that of The Cocteau Twins. The title track, “Wasted Youth Blues,” is a slow, distorted dirge that is lead by echoing overdriven guitars and stomp-like Phil Specter style drumming.

The EP is available for download via this link, and I would highly recommend it. Hopefully, there will be a physical release at some point as well. There is supposed to be more material to come, so keep your eyes open if you like what you hear.